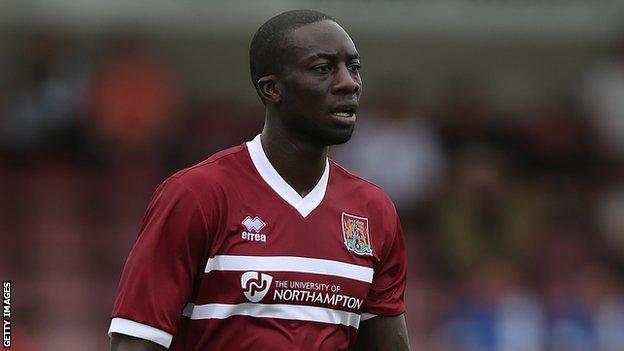 The 31-year-old has signed a one-year deal and the club have an option on a further year.

Manager Aidy Boothroyd told BBC Radio Northampton: "He's much more of an all-round player than we've had there and he's an attacking full-back.

"He's got the experience and he knows the league inside out, and the most important thing about him is he's very, very consistent."

Amankwaah was released by Exeter in April having made 36 appearances last season.

"He's 6'3 tall and he makes us a bit bigger as a team - I think we've lost a lot of height from last year," added Boothroyd.

We definitely need a striker and, all being well, we should have one by York

"He's been in promotion-winning teams and I think he's a really good addition."

Meanwhile, Boothroyd remains confident he can add another forward to his squad, having admitted they are not yet ready to face York in League Two on Saturday.

"We definitely need a striker and, all being well, we should have one by York," he said. "I'm hoping we may have another couple in by then as well.

"There's a few players out there who are free transfers and there's a lot of loan players we could possibly go and get. I'm trying to make sure we get the right one in to fit the bill. We will definitely have somebody but who that will be, we'll wait and see."

Whilst trialist Kieron Cadogan has moved on, Boothroyd says former Hull midfielder Danny Emerton could still earn himself a contract.

"Kieron has got another option and he's going to explore that - I couldn't guarantee anything this side," he said.

"Danny might be a wild card for us. He's exceptionally quick, he's technically very good and unlike some little players, he'll go and fight. He's young and hungry and he has a point to prove. I want to have a little bit longer to look at him."

Northampton are set to start the season without Clive Platt, Kelvin Langmead and Alex Nicholls but Boothroyd says that winger Chris Hackett has recovered faster from his injury than expected and could feature in the League Cup tie with MK Dons next week.