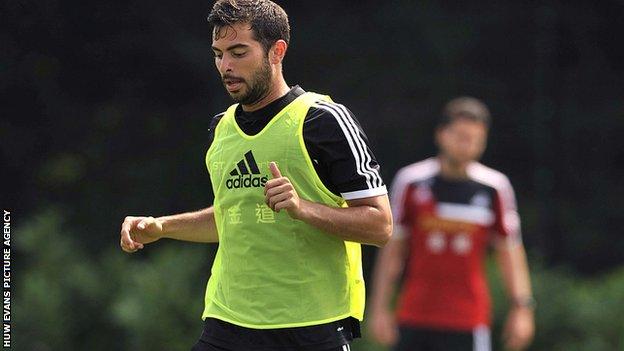 Defender Jordi Amat says he is ready to step into the breach for Swansea City in their Europa League third qualifying round tie against Malmo.

So Spaniard Amat, 21, could partner captain Ashley Williams at the heart of the Swansea defence against the Swedish side at the Liberty Stadium.

"Facing Malmo will be the biggest game of my career so far," said Amat.

I don't know what the manager will do in terms of selecting the team, but I hope I will be given the chance to play.

"The Europa League is a big competition and this game is very important.

"I know Malmo won 7-0 (against Scottish side Hibernian) last week, so it's important for us to keep them at zero.

"I just try to play at a good level and I feel good physically.

"Hopefully playing in La Liga will help me. I'm excited and really looking forward to the first game."

Swansea won their first major trophy when they won the Capital One Cup, with a 5-0 victory over Bradford at Wembley, to qualify for the Europa League.

Amat, a £2.5m summer signing from Espanyol in Spain, played all of the 3-0 win over Reading in the final pre-season friendly on Saturday.

He played alongside the Wales and Swans skipper in the victory and is confident of the developing partnership with Williams.

Amat reveals the pair are already communicating bilingually on the pitch and is confident they will complement each other when they face the Swedish outfit.

"It's very good to play alongside Ashley. He's a very good player and easy to play with," said Amat.

"He speaks a bit of Spanish and that has helped me. It's made my life much easier.

"And we have a lot of Spanish players and the relationship is very good. Everyone at the club gets on well together.

"I don't know what the manager will do in terms of selecting the team, but I hope I will be given the chance to play.

"He makes the decisions, but I am ready for the challenge."