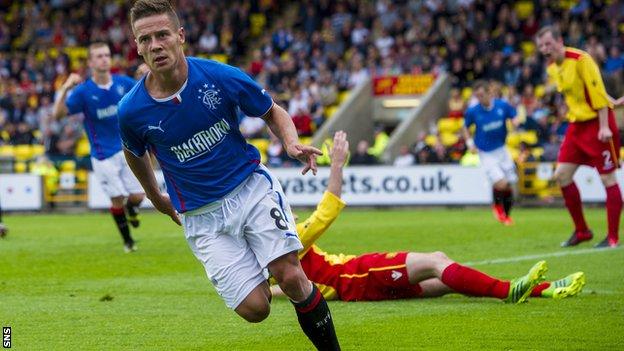 Rangers are better equipped this season to handle the "carnival" that follows being title favourites, according to Albion Rovers manager James Ward.

The Ibrox side struggled initially in their first season in Division Three before cantering to the league trophy.

"I think they've recognised what they went into last year and now they've signed the players who can handle the situations," said Ward.

As long as they do things professionally, Rangers will be fine, they'll win the league

"They've got the balance better and a bit more of a settled environment."

This time last year, fresh from a financial collapse that led to liquidation, Rangers needed extra-time before overcoming Brechin City in the Ramsdens Cup and the Glebe Park outfit will be among their rivals in the new League One this season.

But manager Ally McCoist has during the summer and two of his signings were able to play as trialists in before a transfer embargo placed on the club is lifted on 1 September.

" will give them fouls all over the park and will be an absolute menace to people when the ball's in the box, is excellent and then you've got people round about them like Ian Black who can play and they've got a wee bit of flair here and there," said Ward.

Ward has much experience of the level at which Rangers will compete this season and was assistant to Todd Lumsden as Rovers finished bottom last term.

"It's important that they don't underestimate where they're going to," he said.

"I've felt it over the last couple of weeks. Everywhere Rangers go, there's a carnival and it's a bit of a circus that follows it.

"So, as long as they do things professionally, they'll be fine, they'll win the league and I think, in every game for them, their levels have to be at the highest to match the effort and application of the other team."

Ward can now concentrate on helping Rovers bounce back from their own relegation.

"I'm glad it's over," he said of the match against Rangers. "We can get back to normal now."

Ward, though, stressed that he thought his own side had competed well only for Rangers to score what he thought was a dubious opening goal to pave the way for three more quality finishes.

"Unfortunately, there was a decision that didn't go our way," he said. "Which I think was a hand ball across there at the start of the move that led to the first goal, which the referee's told me it's an accidental hand ball.

"I didn't know we had them in football, but apparently we do."