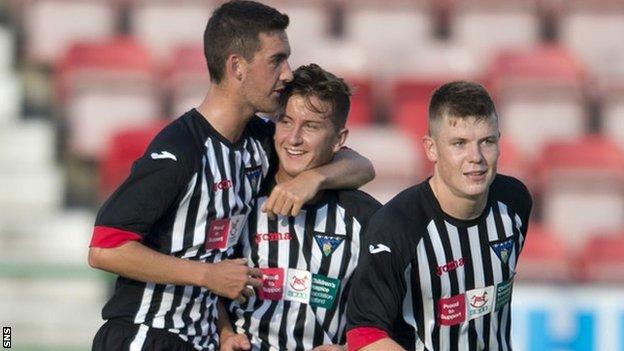 Dunfermline will soon be in the hands of fans' group Pars United after creditors voted in favour of accepting a company voluntary arrangement.

The Fife club has been in administration since March, with debts of around £10m.

Former owner Gavin Masterton abstained from the CVA vote, giving up his claim on £8m owed to him and his companies.

The £500,000 raised by supporters will pay staff who were made redundant and the administrators' fees.

Pars United are now seeking further backing and hope to add to the 1400 season tickets sold over an uncertain summer.

Former Dunfermline player and manager Jim Leishman - who helped front the supporters' bid - said: "This is a fantastic day.

"Up until yesterday, we were still having meetings discussing what might happen if the CVA did not go through.

"It's through now and there is nothing standing in our way now. Now we have got to make sure we have got sustainability and ensure we can survive going forward."

The club's shares were sold for £1, while £80,000 will go to preferred creditors, with former players and staff receiving back-dated pay in full.

Pars United will assume responsibility for all "footballing debts", which administrators BDO say "are understood not to exceed £170,000" and pay BDO's fees of £100,000 plus VAT.

Dunfermline's situation is complicated by their stadium being owned by a separate company, East End Park Ltd, which is being handled by a different administrator, KPMG.

BDO say East End Park Ltd will be "entitled to any residual over and above" the figures they have released, with their main creditor the bank, while KPMG added: "We will now work closely with Pars United to complete the sale of East End Park."

BDO, led by Bryan Jackson, took over the running of Dunfermline after a winding-up order was served by HM Revenue and Customs for a £134,000 tax bill.

A 15-point penalty resulted in Dunfermline being relegated to Scottish League One via the play-offs.

The club should now avoid a 10-point penalty for the forthcoming season and a £150,000 bond payable to the Scottish Football Association.

Pars United's Bob Garmory said: "We thank each and every creditor who voted for this outcome.

"We know that many have suffered greatly from the financial problems of the football club. We now pay tribute to them. This vote will allow Dunfermline Athletic to begin a rebuilding process under a wide spread of supporter ownership."

There is a 28-day period for creditors to appeal against the decision.