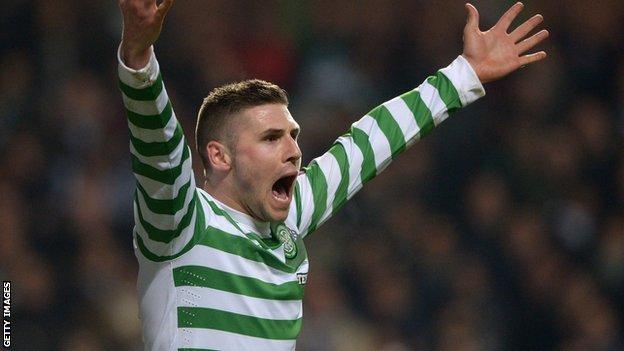 Norwich striker Gary Hooper has said he left Celtic for the Premier League to improve his England prospects.

The 25-year-old completed his after scoring 31 times for the Scottish champions last season.

"I've wanted to play in the Premier League from when I was younger and to get into the England squad," he said.

"I think there's a good chance of that. My aim is to get fit and hopefully I'll get picked."

Hooper joined Celtic from Scunthorpe for £2.4m three years ago and netted 82 times in 200 games.

The Essex-born frontman reportedly came close to receiving a call-up from England boss Roy Hodgson in November last year, but missed out with a hamstring injury.

And now he hopes that swapping Scottish football for the English top flight will enhance his international credentials in the build up to the 2014 World Cup.

"You don't really get a look in up there [Scotland]. Down here I think you've got more chance," he said.

"I have to score goals. It's what I'm paid for and it's what the gaffer has got me in for."

Hooper's new boss Chris Hughton has challenged the striker to "ask questions" of the England management with his performances this season.

"All I think Gary can do this season is ask those questions," he said.

"He is English, which makes him an option, but he's got to prove he can do it in this very difficult league."