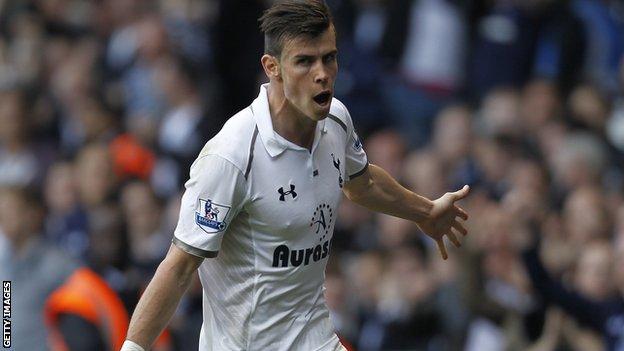 Gareth Bale is "too young" to move abroad and would be making a mistake by leaving Tottenham for Real Madrid this summer, according to David Pleat.

Bale, 24, has indicated he wants to speak to the Spanish giants.

Bale has all the qualities a footballer needs

But former Tottenham manager Pleat, who feels it would take a fee of £100m to even tempt them to sell the forward, told BBC Sport: "I think he's a little bit young to go abroad.

"I doubt he'd find it easy. Many have failed when they have moved overseas."

Pleat added: "One or two have succeeded, but not many. Most have had a difficult time. I think he is young to go, but he might feel that, with his partner and baby, it will be a new start for him.

"I think it might be better if he stayed, continued to work and maybe next summer leave if that is his wish."

Meanwhile, Real Madrid captain Iker Casillas has described Bale as "one of the top three or four players in Europe".

Speaking on the club's tour of the United States the goalkeeper said: "It's normal that his name is being discussed because he has all the qualities a footballer needs.

"Every transfer is controversial in its own way, for better or worse, but we are speaking about a very good, decisive player.

Michael Owen on life in Madrid

Former England striker Michael Owen spent a year at Real Madrid after leaving Liverpool in 2004, before returning to England with Newcastle.

The 33-year-old believes moving overseas is difficult for a player, telling BBC Radio 5 live's Sportsweek on Sunday: "Any player going from over here to Spain, it's a lot different to what you imagine.

"It's a slow pace of life. I was in a hotel for six months with a young child. It's very difficult. You need to get a lot of things in order off the pitch. I'd be surprised if he went this year."

"I'm sure we'll make another signing before the transfer window shuts."

Bale joined Tottenham from Southampton in May 2007 and signed a new four-year contract in June 2012.

Spurs boss Andre Villas-Boas has insisted the Wales international is not for sale and says talks about a new deal are ongoing.

Real Madrid are yet to submit a formal offer for Bale but Pleat, who managed Tottenham from 1986 until 1987 and had three spells as caretaker-boss, expects Spurs to resist an approach from Carlo Ancelotti's side.

"Regardless of whether the player wants to leave, the club are in the driving seat," said Pleat.

"If [a club] have strong and brave leadership, which they have at Tottenham, they have to resist any formal offer that comes in, which Tottenham are determined to do."

Pleat was also director of football at Spurs from 1998 until 2003 under current chairman Daniel Levy and is aware of how the 51-year-old businessman operates.

He believes it would take a huge offer to tempt Levy to part with Bale.

"Tottenham have been very firm," he said.

"If something shattering, like £100m, is put on the table, then I think even the resistance of Daniel Levy may have to give in, but I think even supporters would understand it for that money."