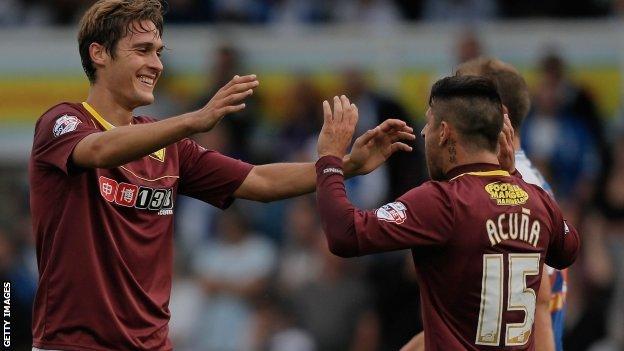 Championship side Watford were given little cause for concern by League Two Bristol Rovers as they swept into the second round of the Capital One Cup.

The Hornets took the lead when Sean Murray robbed the hosts' Lee Brown and slipped the ball past Steve Mildenhall.

Murray turned provider when his corner found Gabriele Angella for the second, before converting Javier Acuna's cut-back for the visitors' third.

Eliot Richards fired home for Rovers but could not spark a comeback.

The prospect of an upset always seemed slim, with Watford opening their league campaign with a win over Birmingham on Saturday at the same time as injury-hit Bristol Rovers, missing nine first-team players, were beaten by Exeter.

And Republic of Ireland Under-21 international Murray took the chance to shine after David Clarkson had hit the post after five minutes in a rare Rovers attack.

Murray's low angled effort found the net to register his first of the season and match his goal tally for the entire 2012-13 season.

Angella's routine far-post header was followed by Murray's confident first-time shot from 15 yards to put Watford three clear and the match out of sight for the hosts.

Richards's neat swivel to sweep home Tom Lockyer's knockdown gave the home fans something to cheer but Watford kept control through to the final whistle.

"When we were 3-0 down I thought 'don't wobble now' as it would have been irretrievable.

"We found a goal which was great for us and it gave us a lift.

"At half-time we asked them to go and play how we play, not how Watford play.

"The boys on the pitch responded well and we came out with some credit."