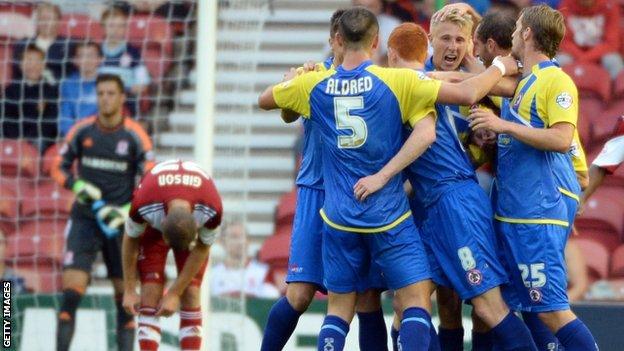 League Two side Accrington Stanley came from behind to beat Championship opponents Middlesbrough in the first round of the Capital One Cup.

Lukas Jutkiewicz gave the hosts an early lead but James Beattie's side levelled through Marcus Carver.

"We had a little bit of luck, which you need, but the lads worked so hard and thoroughly deserved their victory," former Southampton, Everton and Stoke striker Beattie told BBC Radio 5 live.

"We put in a magnificent performance. I'm proud of the players and I'm sure everyone else at the club is too.

"They defended with their lives and deserve the plaudits they are going to get. The hope is always for a financial windfall in the next round. The chairman and the lads want a big draw and they deserve to get one."

The victory was the first of Beattie's managerial career, after Stanley were beaten 4-1 by newly promoted Newport County in Saturday's League Two opener.

Accrington, who finished 18th in the table last season, went behind when Jutkiewicz latched onto a ball over the top and poked past Ian Dunbavin.

Former Watford midfielder Mingoia punished the hosts for their poor finishing when he rifled in from a tight angle to put the Lancashire club into the lead.

There was still time for Dunbavin to make two good saves as Accrington held on to book their place in the second round.