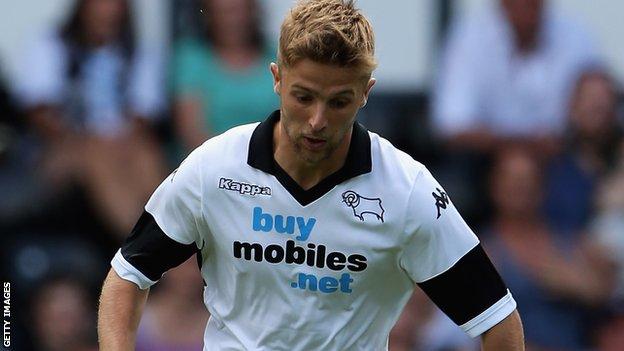 Michael Jacobs scored a first-half winner as Championship side Derby knocked League One club Oldham out of the Capital One Cup.

Jacobs' goal came after 20 minutes when he converted Conor Sammon's left-wing cross from six yards out.

There were chances at both ends, with Oldham keeper Mark Oxley making a great save to deny Jeff Hendrick.

The visitors wasted a great chance to double their lead when the unmarked Ben Davies headed wide at the far post.

And 16 minutes from time, Oldham came agonisingly close to equalising when Montano's shot was cleared off the line by Craig Forsyth.

This was Derby's first win in the competition since they reached the semi-finals in 2009.

"I wasn't happy with our first-half performance, but we controlled it after half-time and could have scored more than one - we should have at least one penalty, maybe three.

"The goal we did score was brilliant. There was a great ball from John Eustace and Conor Sammon rolled it across for Michael Jacobs, so it was a great team goal.

"The clean sheet was pleasing as well. Our centre-backs and 'keeper deserved a clean sheet against Blackburn on Sunday but they got that reward."