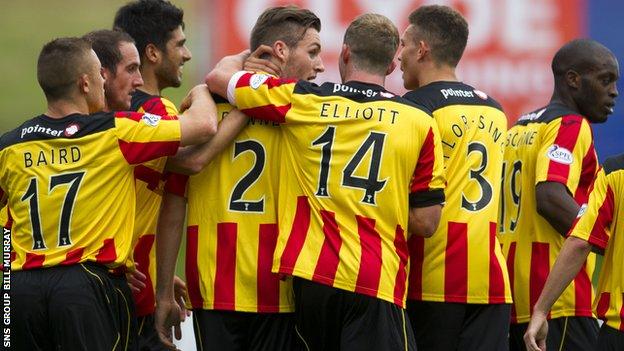 Partick Thistle survived a nervous last few minutes to edge past Ayr United at Firhill in the League Cup.

Christie Elliott teed up Stephen O'Donnell to shoot the Jags ahead in style on 13 minutes.

Mexican defender Gabriel Piccolo thumped a header against the crossbar before Conrad Balatoni nodded in with eight minutes remaining.

Ayr substitute Mark Shankland reduced the deficit with a 89th-minute header and also hit the post soon after.

Thistle started their top flight campaign with a promising 0-0 draw at home to Dundee United but this was a less convincing display, with manager Alan Archibald making six changes to his starting XI.

After a drab opening, the game was suddenly brightened up by O'Donnell's stunning opener.

Ross Forbes crossed from the left for Elliott on the edge of the box. With Ayr defender Martin Campbell rapidly closing him down, the Thistle striker knocked a square pass right for full-back O'Donnell to gallop onto before smashing it into the top corner.

The visitors nearly found an immediate leveller as striker Michael Moffat's deflected strike bounced kindly for partner Craig Malcolm in the box but his lob over Scott Fox in the home goal hit the bar.

And the League One side continued to cause problems for the hosts, with Gordon Pope firing wide from 25 yards.

Jags defender Aaron Taylor-Sinclair then had to boot clear just as Moffat readied himself to nod home a ball bouncing across the goalmouth.

The home side had to wait until the final 15 minutes before they could build any pressure, with Piccolo heading off the bar while substitute Sean Welsh had a nodded effort cleared on the goal-line by Tony Marenghi.

A second Thistle goal arrived as Stevie Lawless picked out Balatoni at the near post to steer a header into the far corner of the net.

Shankland had only been on the park for five minutes when got to Michael Donald's cross before Fox to head into an empty net.

The Ayr goalscorer then passed up a glorious chance to take the game into extra-time to when he rolled a low shot onto the post 30 seconds later.