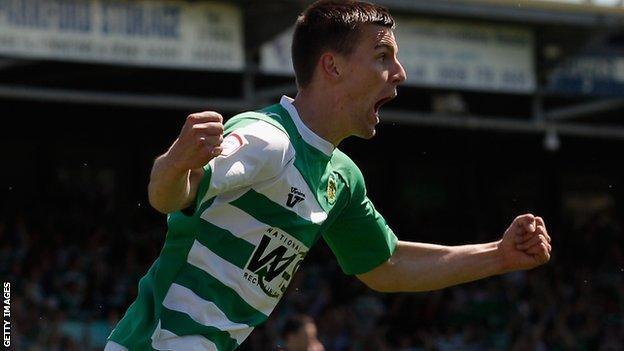 Kevin Dawson's first-half strike secured Yeovil Town a place in the second round of the Capital One Cup at the expense of Southend.

The hosts controlled the game early on, with Craig Reid and Jack Payne both going close with their efforts.

But Dawson broke the deadlock when he cut in from the right and chipped the ball over keeper Daniel Bentley.

Southend pushed for an equaliser but Barry Corr's free-kick skimmed the side netting and Don Cowan shot just wide.

Substitute Ed Upson, who scored Yeovil's first ever Championship goal on Saturday, went close with 10 minutes to go but his dipping volley failed to find the target.

"Towards the end I didn't think we deserved to be on the losing team, the game opened up in the second half.

"Our desire, endeavour and determination to try to was there, everybody has witnessed that.

"It faltered at times because of some strange and curious decisions. I was relatively pleased."

"At times we played some very good football and I thought we looked solid.

"We gave six or seven of our players who didn't play in the first game a run out, so they've got a bit of match play.

"Some of the lads who have come in have had to change in six weeks. Their game mentality is fantastic.

"We came out worthy winners and I was enthused by a lot of our play."