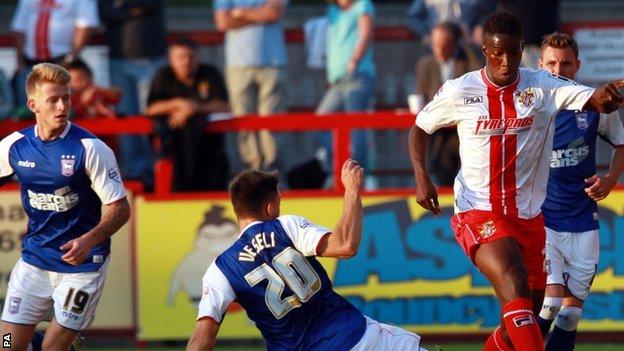 League One club Stevenage dumped Championship side Ipswich Town out of the Capital One Cup thanks to goals from Filipe Morais and Jordan Burrow.

Stevenage took the lead shortly after the restart when Morais converted from the penalty spot after Oumare Tounkara was fouled by Luke Hyam.

Burrow added a second 14 minutes from time, when he slotted in after running on to Luke Freeman's ball.

Ipswich have lost to lower-league sides in five of the last eight seasons.

"I thought the first half was all right, to be honest," said Ipswich manager Mick McCarthy.

"We expected it to be a difficult game but we looked all right in the first half and then in the second half we give a penalty away that the lads are not too happy about, but until I see it I don't know."

The visitors went close to taking the lead in the first half when Scottish centre-back Christophe Berra's header was cleared off the line by Sam Wedgbury.

It was the home side who went ahead, early in the second half, when Tounkara was clipped inside the box by Hyam and Morais netted from the spot.

And Burrow made sure of his side's passage into the second round when he turned in Freeman's low cross from close range.

"We lost very well at the weekend," said Stevenage boss Graham Westley, whose side were beaten 4-3 at home by Oldham.

"Tonight I thought we won very well and we'll take the positives."