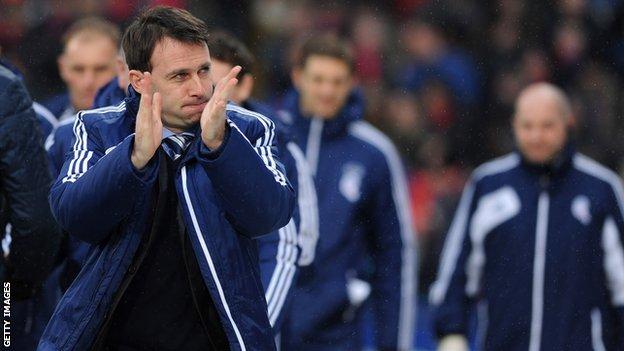 Sanmi Odelusi scored twice on his full Bolton debut as Wanderers eased past Shrewsbury and into the second round of the Capital One Cup.

Rob Hall put Bolton ahead with a long-range shot before Aaron Wildig levelled after stealing in behind the defence.

Odelusi then converted Hall's cross, before grabbing his second with a wonderful shot into the top corner.

Manager Dougie Freedman made seven changes from the team that drew 1-1 with Burnley in their opening Championship match of the season, with Odelusi coming in to make his second appearance for the first team.

The 20-year-old, an 82nd-minute substitute in a 3-2 defeat by Charlton in March, applied a superb finish to a flowing counter attack to make sure of the win.

Freedman said Odelusi's brace was reward for his hard work on the training ground.

"When I first came in he was just in a lull but I see potential in him so we've really just worked with him," the Scot said.

"He's working hard. The young guy deserves everything he gets."

Shrewsbury could have turned the match their way, with Wildig and Luke Summerfield both forcing fine saves from Andy Lonergan with the score at 1-1, but Bolton's attacking quality told in the end.

Shrews manager Graham Turner told BBC Radio Shropshire: "We stuck to the game plan and tried to work the ball into good areas, which we have done, and we've been caught on the counter attack by a very good side that's been quick, decisive and clinical in its finishing.

"It's disappointing the way we conceded the goals, but we stuck at it, got into good positions, and we might have scored more."