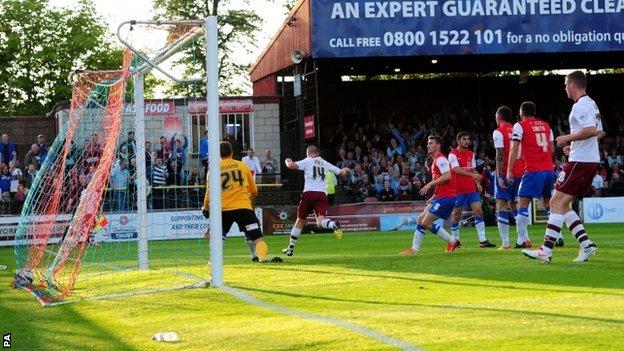 Burnley easily negotiated their way past League Two York City to reach the Capital One Cup second round.

The Championship visitors went ahead when Ross Wallace's low corner was diverted in by new signing Dave Jones.

A comprehensive victory was rounded off by Scott Arfield's measured finish from the edge of the box.

Burnley made an assured start to their league campaign with a 1-1 draw against Bolton on Saturday and another hard-working performance ensured they did not fall victim to an upset at Bootham Crescent.

Sander Puri shot wide from 25 yards for the Minstermen before Ashley Chambers and Ryan Bowman went close for the hosts.

"A lot of the game I was very pleased, we competed well.

"The thing that disappointed me most was for 20 minutes of the game we never started. We were too far off and they're a Championship side. If you let good players play they will take advantage.

"After 20 minutes we started to do what we can do and we were a force in the game.

"Up until the last 15 minutes when we started to get stretched with the goals I was very pleased. We competed well. Disappointed with four goals put against us but we stuck at it and that's very important."