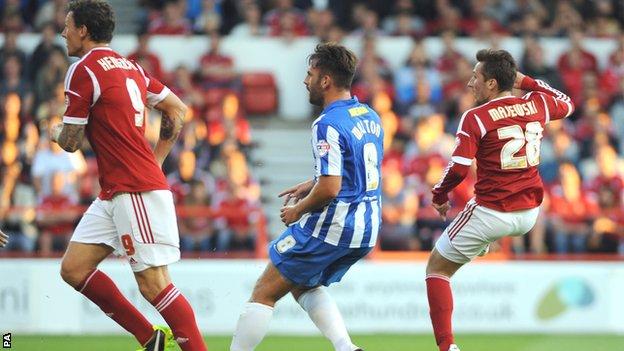 The Reds had a first-half lead as Darius Henderson's touch set up Radoslaw Majewski, who turned and fired low past goalkeeper Scott Flinders.

Greg Halford's header from Majewski's corner made it 2-0 and a minute later Andy Reid set up Matt Derbyshire, whose looping header deceived Flinders.

Neil Austin's header from 12 yards pulled one back for the visitors.

Forest had a major injury concern as they lost Simon Cox halfway through the first half when he was stretchered off with a ankle injury.

Hartlepool, who had manager Colin Cooper returning to the club he won promotion to the Premier League with in 1994, had injury problems of their own when goalkeeper Flinders had to be replaced by Andy Rafferty at half-time.