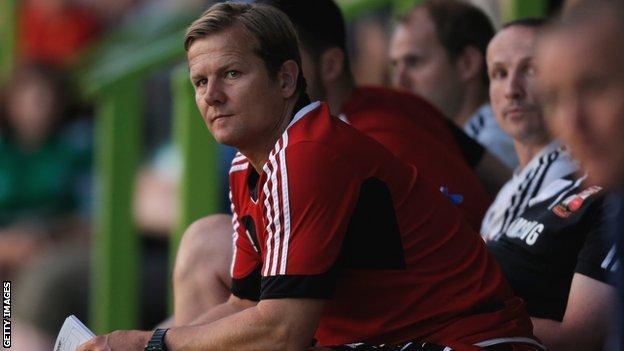 Assistant manager Mark Cooper will take charge of Swindon for the opening game of the 2013-14 season.

The 44-year-old took over as caretaker boss following the departure of Kevin MacDonald earlier this month.

And with no permanent replacement lined up, Cooper will lead Town in Saturday's trip to Peterborough - his former club.

"All of a sudden we are five days away from the season and they're saying 'get on with it, you're in charge on Saturday'," he told BBC Wiltshire.

Cooper, a former Exeter City midfielder, started his managerial career at Tamworth before joining Kettering and then Posh in November 2009.

But his time at London Road was short lived; his contract was terminated after only 13 games, eight of which were defeats, with the club bottom of the Championship.

"I'm sure they [Peterborough] will be looking forward to me coming back," Cooper added.

"It was tough there. I'd built a decent reputation as a young manager and there were a lot of clubs who had made it known they were interested in me.

"For one reason or another I ended up at Peterborough. It was probably the wrong club for me at that time. But they've gone their way and I've gone mine.

"My daughter said to me the other day 'you've got to go and get revenge'. But it's not about me and Peterborough, it's about the game."

Cooper has since worked at Darlington, had a second stint with Kettering and a short-lived spell at AFC Telford, which lasted 30 days before he took on the assistant role with Swindon in March.

Exeter manager Paul Tisdale, Tottenham coach Tim Sherwood and his former team-mate Les Ferdinand have all been linked to the vacant Swindon role but the League One club have yet to confirm who is in line to replace MacDonald, who left after five months in charge.

Cooper has also been mooted as a contender for the full-time job, and he added: "I'll try and get some results and then, who knows?

"I'm just cracking on with it and doing the best I can."