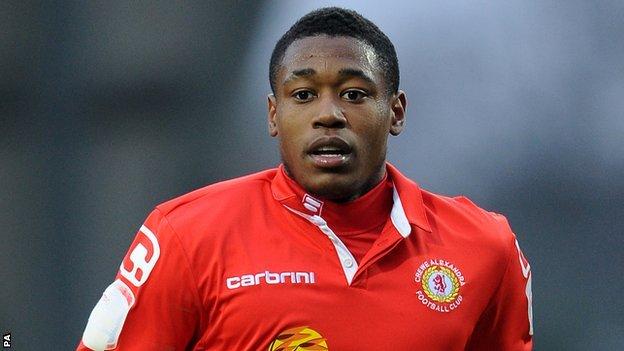 Crewe Alexandra manager Steve Davis has confirmed that the club have been in talks with Arsenal midfielder Chuks Aneke to bring him back to Gresty Road.

Aneke, 20, scored eight goals in 38 appearances during two loan spells at the League One side last season.

And Davis admitted he was interested in the former England Under-19 man.

"I've had dialogue with Chuks, he's been in Asia. So we'll just check out that position there," the 48-year-old told BBC Radio Stoke.

"He did terrific for us last season. I think initially people didn't see his quality, but over time he came to fruition and his fitness was much better.

Aneke has only made one appearance for Arsenal, coming on as an 89th-minute substitute in the League Cup against Shrewsbury in September 2011

"The quality, creativity and goalscoring ability he's got was apparent to everybody. He's the creative player that [former captain Luke] Murphy was and we could do with that type."

The departure of Murphy to Leeds for an undisclosed fee believed to be around £1m leaves Davis without a captain with the new season less than a week away.

Davis revealed he had managed to whittle his list of replacements for the armband down to three players.

"Harry [Davis] has had it and done fine, Abdul [Osman] has accepted it well and it's not affected how he played, and Duggy [Adam Dugdale] has had it too. It will probably be one of those three I would have thought," Davis commented.

"They all have different ways of showing leadership. Luke was quiet but then became more of an organiser and a leader.

"And it's the same for them. They are lads who are good around the dressing room, well respected and very professional in how they approach things.

"Whether they are shouters or bawlers or lead by example is irrelevant. It's just important they're out there and doing the best for the team."