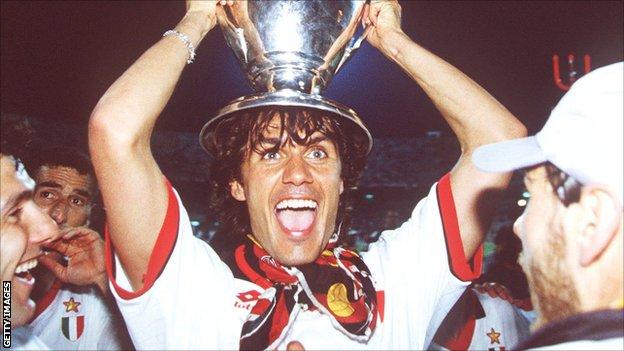 Former Newcastle goalkeeper Steve Harper is "honoured" an AC Milan legends team will face a Magpies all-star side in his 20-year charity game.

Alan Shearer, Franco Baresi and Paolo Maldini are among the players confirmed for the match on 11 September.

"We're going to be privileged to see some of the greatest players to ever play the game. If you picked an all-time world XI then Franco Baresi and Paolo Maldini would certainly be in a lot of people's teams.

"To have that iconic AC Milan team that I grew up watching on a Sunday is fantastic."

The three most high-profile members of Milan's 'Glorie' legends team are the defensive trio of Maldini, Baresi and Alessandro Costacurta.

Under Fabio Capello they were part of the side that won the 1994 European Cup, although the latter two were suspended for the final.

However they continued to star for the Rossoneri for the next decade, Baresi winning three Champions League titles, while Maldini and Costacurta both lifted five each.

"I was very happy to hear of the possibility of AC Milan Glorie travelling and playing against a Newcastle United legends team at such a famous stadium," Baresi said.

"I know the passion of Newcastle fans and I know of the club's history and the love of football in the city, so I congratulate Steve and wish the fans and Newcastle United a magnificent occasion."

Harper, who joined Hull City following the end of his 20-year spell at Newcastle United this summer, made 199 appearances for the club following his move from Seaham Red Star.