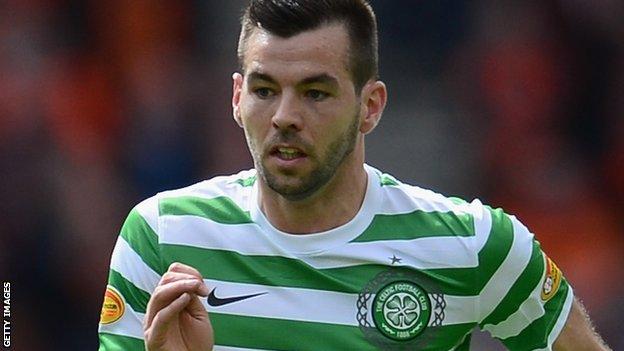 Celtic midfielder Joe Ledley has played down speculation linking him with a return to Cardiff City.

Reports had suggested the Premier League newcomers could be set to make a £3m bid for the Welsh international.

Ledley admits the prospect of playing in the Premier League is a big attraction for some players but insists his focus is on Celtic.

"It's just rumours at the moment. There has been nothing official," Ledley said.

"It [Premier League] does attract people, but at the moment I'm with Celtic and I'm just concentrating on a big week ahead of me.

"A lot of players want to play in the Premier League and that's why they have done pretty well with their signings so far."

Ledley, who has won 46 caps for Wales, is in the final year of his Celtic deal but has said previously he would like to extend his stay in Glasgow.

The midfielder said he was hoping to begin contract talks with the club in the coming weeks.

"We still haven't actually spoken to the club at the moment," Ledley added.

"My agent has been away and the club has been pretty busy as well with sorting out new players.

"At the moment I'm just concentrating on qualifying for Europe and doing brilliantly for the club and playing well."

The 26-year-old joined Celtic from home town club Cardiff on a free transfer during the summer of 2010.

He has played over 100 games and won two Scottish Premier League titles and two Scottish Cups during his three seasons with Celtic.

Ledley has been hampered by injury during pre-season but made his return to action in Saturday's friendly defeat to Borussia Monchengladbach.

The Welshman hopes to feature in Celtic's Champions League qualifier against Elfsborg at Celtic Park on Wednesday.