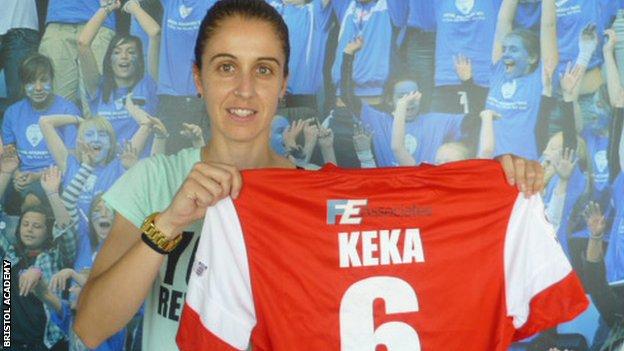 Bristol Academy have signed Spain midfielder Keka for the remainder of the 2013 Women's Super League season, subject to international clearance.

The 32-year-old, formally known as Cristina Vega, links up with fellow Spaniards Laura Del Rio and Natalia, with whom she played at Rayo Vallecano.

Keka has won the Spanish league on three occasions and competed in the Champions League.

"She's already played with Natalia and knows Laura really well, so I think she'll fit in quickly and will be an effective signing for us."

Keka has been drafted in as injury cover for Lucy Staniforth, who is out with a knee injury.

"Technically, the Spainish players are very good but Keka is also a good competitor," continued Sampson. "She likes to put her foot in and make a tackle.

Bristol return to WSL action on Sunday at Everton and are currently joint-top of the standings, level on points with Liverpool.