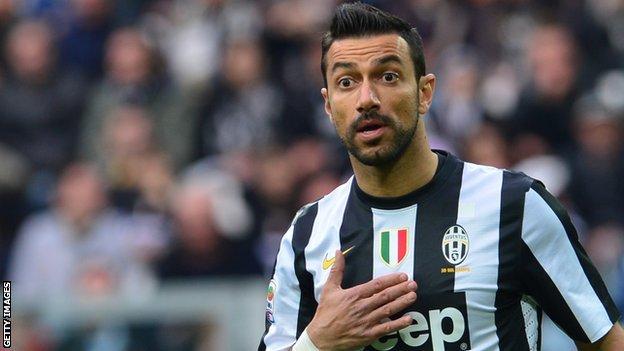 Norwich boss Chris Hughton has refused to rule out a move for Juventus striker Fabio Quagliarella.

Hughton did not deny an interest in the 30-year-old, instead comparing the scenario to his pursuit of Gary Hooper, who joined from Celtic last week.

"That is a story I have seen and heard. But it was exactly the same with our work with Gary," he said.

"Most were aware there was an interest. Until there was something official to say then we didn't say it."

He added: "From our side we did our work in the correct way [for Hooper], which is very much behind the scenes."

Quagliarella, who has seven goals in 25 caps for Italy, scored 13 times in 34 games for Juventus last season.

A former Torino forward, he has vast experience in Serie A with Sampdoria, Udinese and Napoli.

"The fact that some players are being linked with us is in some ways a good thing, because it means we are trying to be proactive and trying to improve," said Hughton.

"But certainly until there's anything to say it's all speculation."

The Canaries will already have a new-look forward line next season, with the arrivals of Hooper and Ricky van Wolfswinkel, while Luciano Becchio has made only two starts since joining in January.