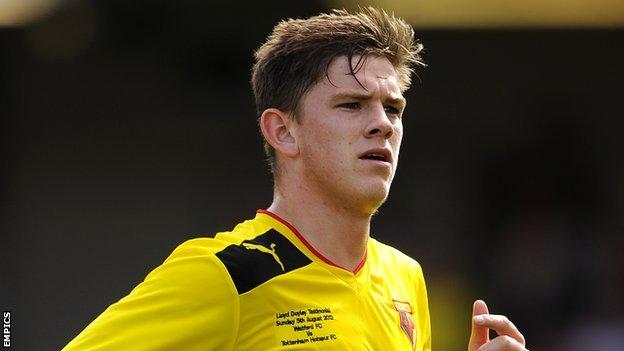 Watford midfielder Sean Murray says he would leave the club on loan to play first-team football.

The 19-year-old made just eight starts last season for Gianfranco Zola's side.

"I want to be playing week in, week out. If it gets to the point where I'm not involved as much as I would like, maybe that [a loan move] is an option."

He added: "It's always good for your confidence and experience when you're playing a lot of games.

"Going out would benefit me even more. But being here playing with top players, you're always learning."

Murray made his Watford debut at the end of the 2010-11 campaign and the following season went on to score seven goals in 19 games, winning a

But he has made just four appearances since the turn of the year and faces competition in midfield from summer signings Almen Abdi, Cristian Battocchio, Iriney and fellow youth player Connor Smith.

He said: "I usually go and knock on the manager's door and ask him what I need to improve on. I never knock on his door and say 'why aren't I playing?'

"Every season you have goals and for me it is just to play as many games as possible.

"And when I'm not playing I want to keep as fit as possible so I will be right at it."