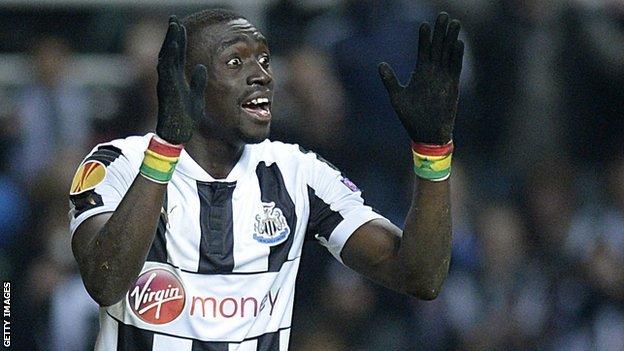 Papiss Cisse says he wants to focus "100% on football" after agreeing to wear the Wonga logo on his Newcastle United shirt following discussions with Islamic teachers.

It's great to be training with my team-mates again

The striker, a Muslim, fell out with the club because he was not prepared to promote the money-lending company.

The two parties eventually resolved their differences, but Cisse admitted it had been "a very difficult time".

He told the club's website: "I feel great and ready to go."

The Senegalese forward, 28, played and scored in a 2-0 pre-season friendly win at Scottish side St Mirren on Tuesday.

Cisse is one of a number of Muslims at Newcastle but was the only player to object to the club's choice of shirt sponsor on religious grounds.

The contract with high-interest pay-day lender Wonga is thought to be worth around £8m a year to the club.

"I have had some useful discussions with my club, my family and Islamic teachers in the last few weeks," he said.

"After a huge amount of thought and reflection, I have made the decision to follow my team-mates and wear the kit.

"Although I did not go to Portugal on the training camp, I was back here working hard on my fitness and preparing for the start of the new season.

"Since then, it has been great to be training with my team-mates again."

Cisse joined the Magpies from German side SC Freiburg in January 2012 and has scored 26 times in all competitions.