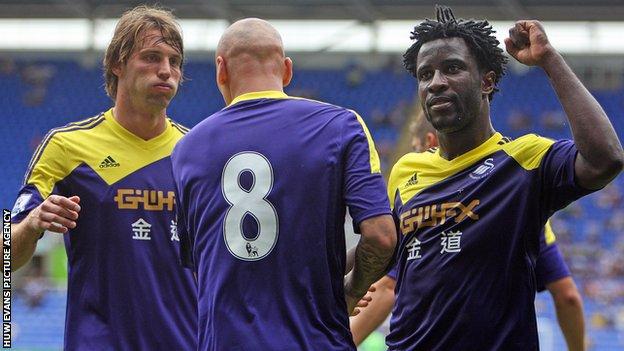 The Spaniard, regarded as the signing of the season in the Premier League, scored 22 goals in all competitions.

Michu signed a four-year deal in January and is looking forward to playing a deeper role behind Bony.

"I prefer to play behind the striker so I hope you will see a better Michu," he told Swansea City's website.

"I scored more goals when I played behind a striker last season.

"I like that position because I can move around and the centre-backs are looking for the striker and not me. I can arrive late from the second line and score goals.

"It was important for Swansea to bring in a top striker and Bony is a super player. We're pleased he has joined and he will try to help us."

Michu and Bony combined well in the Swans' 3-0 pre-season friendly victory over Reading, with the Spaniard scoring one goal and Bony creating the other two.

The Swans broke the club's transfer record this summer with the £12m signing of Ivory Coast striker Bony from Vitesse Arnhem.

England international Jonjo Shelvey has arrived from Liverpool and Jonathan de Guzman has returned for another year-long loan while Spanish trio Jordi Amat, Jose Canas and Alejandro Pozuelo have also headed to the Liberty Stadium.

Michu believes manager Michael Laudrup has strengthened the new squad and has hailed the influx of new arrivals.

"The gaffer has brought in a lot of quality players, and they have all settled quickly into the team," said Michu.

"It is easier for these players when they come into a club that plays the way they like to play.

"I think Jonjo has shown his quality already while Jordi, Jose and Alejandro have come to a new country but have adapted straight away.

"And then we have Wilfried, who has given us something different. He is so strong and can hold the ball up very well.

"He is a goal scorer, but he has so much more to his game than goals. He links well with players, he can drop into the attacking midfielder role too when needed, and he's good in the air.

"And, of course, de Guzman is back with us and we all know what quality he has. He played very well last season and I think it's great that he's at Swansea for another year.

"It means we have a lot of options around the pitch. It will be difficult for the players to get into this team - and that goes for everyone, because the manager now has a number of players for each position.

"It is a good problem for the manager to have, because we are involved in four competitions this season and we want to be very competitive in them all."

Swansea's competitive season starts on Thursday evening when they meet Malmo in the first leg of a Europa League third qualifying round tie at the Liberty Stadium.