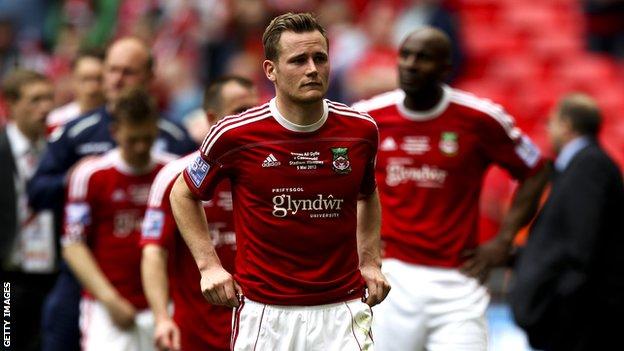 Wrexham's 2012-13 campaign will be remembered for two contrasting afternoons at Wembley.

Victory over Grimsby Town in a penalty shoot-out in the FA Trophy final in March will live long in the memory.

But it was another final at the home of English football just over a month later which ultimately defined Wrexham's season.

Dreams of a Football League return were shattered by Newport County in an all-Welsh Conference promotion final.

The last time they were in the League was 2008, and the loss to Newport was a third season in a row that their hopes had ended in the play-offs. And a final defeat against their Welsh rivals will have been the most painful of all.

But Wrexham are not dwelling on May's failure and are determined to bounce back once again.

"You can't change the past and only influence the future. You can't really dwell on the past, you've got to look forward and that's what we are going to do."

Andy Morrell's side proved more than a match for their title rivals last season, with wins over eventual champions Mansfield Town and play-off winners County.

But ultimately too many drawn games and not enough goals hampered their title ambitions.

The loss of two scorers in Jake Speight and Mathias Pogba in the summer was to prove costly and Wrexham's lack of goals was exposed during the promotion final at Wembley.

What's new for this season?

Wrexham's emphasis is now on youth, driven as much by the talent being produced by the club's centre of excellence as well as the need to be financially prudent.

Joe Clarke and Johnny Hunt established themselves as regulars last season and Morrell has shown he is not afraid to give youngsters a chance.

The manager has predicted a bright future for 17-year-old youth team graduate Bradley Reid, a striker who made four substitute appearances in the Conference Premier last season.

Midfielder Rob Evans has also made an impression in a handful of first-team games while full-back Steve Tomassen gained experience on loan at Airbus UK last season.

Experienced players Chris Westwood and Glen Little have also moved on while Morrell himself plans to scale down his on-pitch presence this season.

Influential captain Dean Keates remains at the club after signing a new one-year contract extension in May.

Keates, however, will miss the opening weeks of the season after having surgery on a toe injury which troubled him towards the end of last season.

Morrell had been hoping to add to his squad ahead of the season opener against newly-promoted Welling on 10 August, but has been frustrated in his attempts.

But with an existing squad which has a good balance of experienced players such as Ormerod and Stephen Wright, as well as youthful promise, Wrexham should again be contenders.

Wrexham's rivals will include big-spending Forest Green Rovers and Luton Town as well as other sides who missed out in last season's play-offs.

"Forest Green have spent on three new strikers, all prolific in their own way," assistant manager Billy Barr said.

"And obviously Luton are the biggest club in the league with their fan base.

"If you look at those two and Grimsby, Kidderminster and Cambridge, there's going to be a surprise team in there.

"I just hope we can have something similar that we've had for the last three years but obviously coming out on top at the end of it."