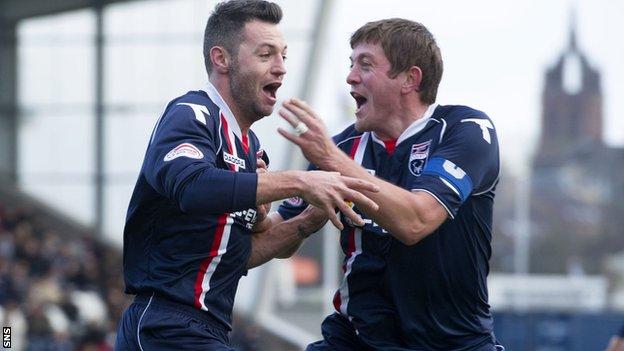 Brittain was sent off for a trip against Den Bosch on the club's Dutch tour last week.

Manager Derek Adams indicated he wanted to appeal against the decision but was unable to do so due to Uefa rules.

Sproule was involved in a brawl with Ross MacPherson of Highland League side Forres Mechanics in early July.

"Both players will be missed," Adams told BBC Scotland. "They are experienced players but it's up to others in the squad to step in."

The Staggies finished fifth in their debut season in the top flight but Adams is not setting his sights any higher this term.

"Our goal is to stay in the Scottish Premiership," he explained.

"That's our main objective to start with. If we can do that, we've succeeded in doing our job.

"Last season was terrific. We finished above the likes of Aberdeen, Dundee United, Hearts and Hibs.

"They will all want to get back ahead of us. From our point of view, it's going to be difficult but we'll try and stay above them.

"We are a very small club compared to the rest of them."

County open the campaign away to champions Celtic but can take confidence from a home win and two draws against Neil Lennon's side last term.

"Facing Celtic at the best of times is difficult," said Adams.

"But we'll be there for the unfurling of the championship flag and will need to provide a guard of honour.

"We collected a good number of points from them last season, so we'll just go there and do our best."

Summer signing Melvin De Leeuw is likely to miss the visit to Celtic Park with an ankle injury.