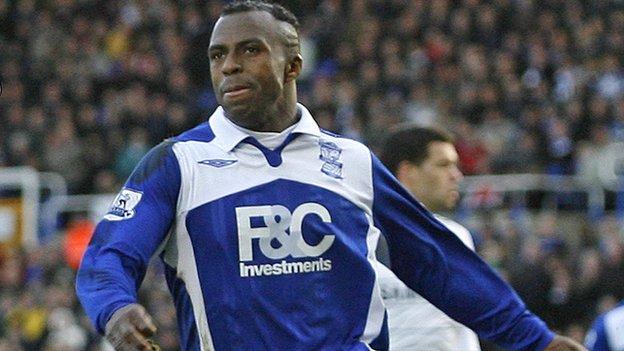 Birmingham City have revealed plans to pay tribute to their former striker Christian Benitez, who died on Monday at the age of 27.

Birmingham will hold a minute's silence before Saturday's game against Watford, while Birmingham players will wear black armbands.

According to the Associated Press, Benitez's funeral will be held in his native Ecuador on Thursday.

Benitez, capped 58 times by his country, spent the 2009-10 season on loan at Blues from Santos Laguna but returned to the Mexican side when the St. Andrew's club decided not to sign him permanently.

Also known as 'Chucho', Benitez had been playing in El Jaish's 2-0 win against Qatar Sports Club in the Sheikh Jassem Cup.

Birmingham said in a statement: "Everybody associated with the club was deeply saddened to learn of the passing of Chucho.

"The Ecuador international was an immensely popular character at St. Andrew's following a season-long loan from Mexican club Santos Laguna during the successful 2009-10 campaign.

"A minute's silence, alongside a video tribute played on the stadium's big screen, will be held before kick-off [against Watford] while Blues players will wear black armbands during the match.

"A large number of supporters have also contacted the club expressing a desire to celebrate Chucho's time at Blues with a minute's applause in the 11th minute to mark the striker's squad number during the 2009-10 season.

"Supporters are free to embrace this spontaneous gesture on Saturday if they so wish."

Benitez scored four goals in 36 appearances during his time in England and came to prominence during the 2006 World Cup in Germany.

The son of Ermen Benitez, one of Ecuador's all-time leading goalscorers, Benitez left Santos Laguna for Club America, another Mexican side, in 2011.