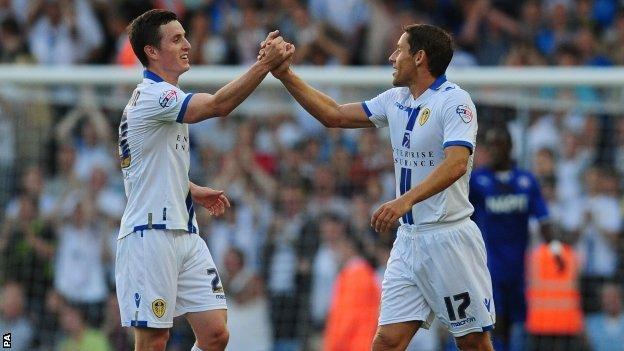 Michael Brown and Dominic Poleon scored as Championship side Leeds came from behind to defeat League Two Chesterfield in the Capital One Cup.

Eoin Doyle headed the Spireites ahead from Drew Talbot's cross midway through the opening half before Leeds scored twice in four minutes.

Brown levelled with a 20-yard strike before Poleon scored with a crisp shot from the edge of the box.

Nathan Smith hit the post for the away team deep into injury time.

Tendayi Darikwa also had a good chance to level for Chesterfield but he delayed his shot and Jason Pearce was able to clear off the line.

The away team's defeat means they have now been knocked out of the League Cup in the opening round for the past seven seasons.

Leeds, who might have scored a third but for a great save from Tommy Lee to deny Luke Murphy, have never been knocked out of the competition in the first round.

They defeated Everton, Southampton and Tottenham in cup competitions last season and can now look forward to Thursday's second-round draw.

Leeds boss Brian McDermott: "Dominic has lots of potential. We are trying to turn him into the all-round player he can be.

"We haven't played well but we won the match and that is very important. I must confess I didn't enjoy it. We made seven changes and that can backfire on you.

"Some big teams have gone out of the competition and we are not one of them, so that is pleasing."

Chesterfield assistant manager Leam Richardson: "We came here to give a good account of ourselves and we did that.

"The result was disappointing but there were a lot of positives to come out of the game.

"We are trying to gel as a team and make small steps together. We controlled a good proportion of the game, which breeds confidence."