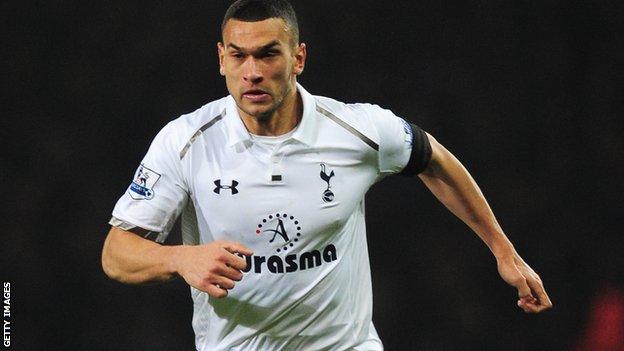 Cardiff have signed England international defender Steven Caulker from Tottenham for a club record fee, understood to be in excess of £8m.

Caulker, 21, spent a season on loan with Swansea City in 2011-12, playing 26 times as the Swans survived their first season in the Premier League.

He said: "I'm delighted to be here and excited for this fresh challenge.

"You get the sense of excitement from everybody at the club and I'm really looking forward to being part of it."

Caulker, who scored against Sweden in his only appearance for England, is manager Malky Mackay's fourth signing of the summer and the club's second record signing of the transfer window.

The previous record was set when striker

His arrival was followed by the signings of Derby County defender John Brayford and Brentford goalkeeper Simon Moore.

Cardiff are still in negotiations with Toulouse over the potential transfer of midfielder Etienne Capoue after earlier being rebuffed by Thomas Ince, who chose to stay with Blackpool rather than move to the Welsh capital.

Caulker, who was part of the Great Britain squad at last year's London Olympics,only signed a new four-year contract with Tottenham last summer.