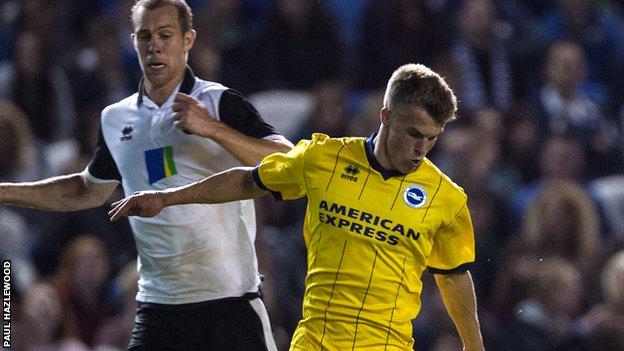 Brighton & Hove Albion midfielder Solly March has set his sights on breaking into the first-team squad this season.

The 19-year-old, who is yet to make a senior appearance for the Seagulls, has featured for the club in pre-season.

He told BBC Sussex: "I've got to keep pushing, training well and hopefully I can get my chance and take it.

"I am quite small and the Championship is a physical league so to get bigger, stronger and faster are the main things for me really."

It has been my dream since I was a young kid to get my debut. Hopefully this season, in the first few games, I will get my chance

March joined the Championship outfit from Lewes in December 2011 and impressed for Albion's development squad last season, winning the young player of the year award.

Having previously featured on the bench for the first team, he hopes he can cope with the step up in the pace of the game.

"Development squad football is a lot easier as you get more time on the ball," he added.

"With the new gaffer [Oscar Garcia] in and the new staff we're doing two-touch [drills] in training and I've got to get used to it. Once I am used to it I think I can make the step up.

"It has been my dream since I was a young kid to get my debut. Hopefully this season, in the first few games, I will get my chance."

March was handed the man of the match award in Brighton's final pre-season friendly against Norwich after scoring a long-range goal.

"It's definitely got to be the best goal I have scored, with the occasion and in front of 10,000 people, although it wasn't a league game," he said.

"I had two shots before but didn't connect - but that one flew in the top corner.

"It was a nice feeling and hopefully I can repeat it in the league."