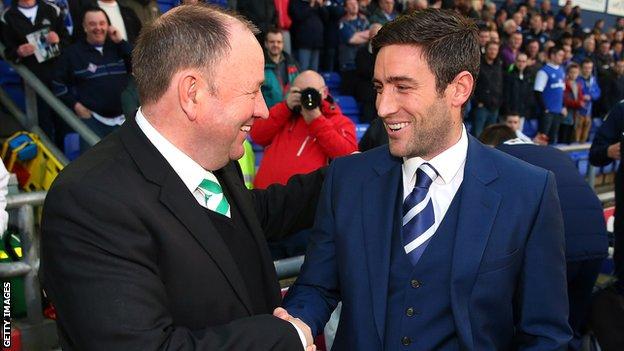 Lee Johnson would like to emulate his father by leading unfancied Oldham to promotion from League One this season.

Yeovil, under the management of Gary Johnson, will play in the Championship for the first time next term after

"There's always someone that makes a challenge in League One that nobody's expecting," the 32-year-old Latics boss told BBC Radio Manchester.

Fitness and attitudes should not be an issue, but a relatively small squad of players must stay injury-free if they are to make the leap into a higher division

"Last year it was my dad's team Yeovil, and we hope this year it can be us."

Oldham were in deep relegation trouble when but he guided them to safety, with the Latics taking 15 points from their final 10 games.

Among their four victories in that period was at Boundary Park in April.

The final weeks of last season were a tough introduction to management for Johnson, the youngest boss in the Football League, and he is now looking forward to his first full campaign in charge of Oldham.

He continued: "I've really enjoyed it [pre-season]. It was so intense in that five-week period towards the end of the season from me getting the job.

"The summer, as well as being intense, has been enjoyable.

"I've been doing all the recruitment and a lot of time and effort goes into that. I'm delighted with the lads I have brought in and hopefully we can produce some good displays for the fans.

"The target is definitely progression. We feel we've put a good squad together. It's a young squad so it's a little bit unknown, but we've certainly got some talent and some goals in us."