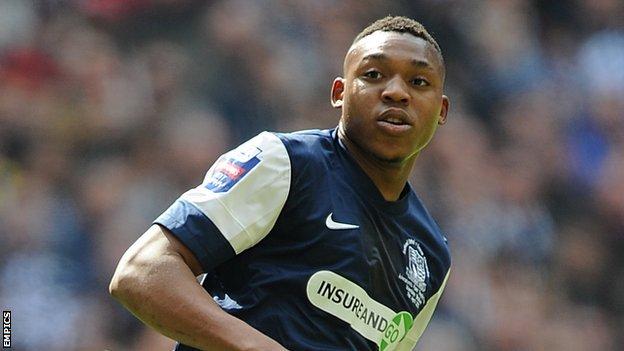 The precise value of the transfer is undisclosed, but the 20-year-old has signed a four-year deal.

Britt made an electric start with Southend and had a run of 12 goals in 21 games. Then the goals dried up a little bit.

But last season was Britt's first real run in professional football. so you can forgive him for those goals drying up.

But when he was bang in form he knew precisely where the goal was.

He scored 16 goals in 49 games while on loan at Southend last term and netted five in five for Conference Premier Braintree the season before.

Watford have first refusal on buying back the forward, should another club have an offer accepted.

Manager Darren Ferguson has been searching for a striker since last season's joint top scorer Dwight Gayle left for Crystal Palace this summer.

"We always wanted somebody in and frankly the chairman has backed me on this one," Ferguson told BBC Radio Cambridgeshire.

"We've still got another one we'd maybe like to bring in as well. We haven't finished there.

"We'd maybe have to balance the books and one or two go out but we were aware of that anyway."