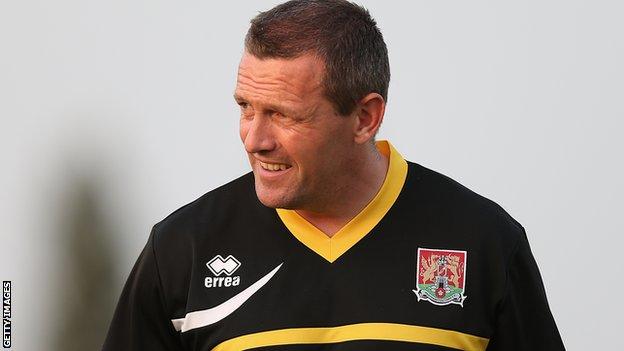 Northampton Town manager Aidy Boothroyd says they now have the players to add more variety to their style of play.

The Cobblers beat Leicester City 2-1 in their final pre-season game.

And Boothroyd told BBC Radio Northampton: "I'm not a purist, but I do believe in good attacking football. I think we've got variety now.

"I'm not going to start saying you'll see Barcelona at Sixfields, but certainly we are looking to play a different game."

He added: "What we've got is players who can handle a ball.

The main issue for me this season is the away form, which last season wasn't good enough, especially against teams in and around the promotion race.

I have gone on record to say that a domineering centre-half is crucial to their promotion chances but now I think priority must be given to finding that elusive goal-scoring striker.

"That's not to say the ones before couldn't, but these are a little bit better than anything I've ever had, particularly in the midfield."

Northampton reached last season's League Two play-off final despite recording only four away wins, but were easily beaten at Wembley by Bradford.

"I can't do anything about people's perceptions," said Boothroyd.

"I like penetrative football, whether it be on the floor or in the air."

Boothroyd is still looking to make additions to his squad before the trip to York City on Saturday.

"Danny was terrific. I was very impressed with him," said Boothroyd.

"Danny and the other boys here have done themselves no harm at all.

"I've known Michael from when he was an Under-13 at Norwich, and he's not been sorted out yet, which I'm amazed at.

"I'm amazed at some of the players that are still out there that haven't been picked up yet. He was excellent.

"I'm going to have a think about all the guys we had on trial on Wednesday. I'll make some calls and then hopefully, by Thursday, we'll have another couple in."

Northampton are still looking for a striker to replace Adebayo Akinfenwa's goals and cover Alex Nicholls' long-term absence, but defender David Artell is said to be seeking a move away.

"We know who [our target striker] is and we're going to have a crack at it," said Boothroyd.

"But he's a terrific professional and at this stage he's available and ready. If he's called upon he will be there. I've not had a minute's problem with him."