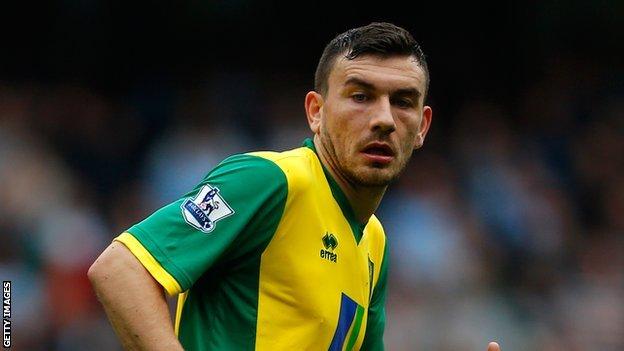 West Ham have reportedly been interested in signing the 25-year-old Scotland international.

But Hughton told BBC Radio Norfolk: "It's very simple and I can set the record straight. It's a family issue.

"He will be with us hopefully on Wednesday and certainly on Friday. It's very much a personal issue."

Reports in Scotland have said Snodgrass was in Glasgow after his partner was involved in a car accident in the city.

The former Leeds wideman had an influential debut campaign at Carrow Road last season, scoring six times as the Canaries avoided relegation from the Premier League.

Norwich face Cambridge United on Wednesday and travel to Portuguese side Braga on Friday.

Meanwhile, Hughton gave an update on the fitness of centre-half pair Sebastien Bassong and Michael Turner.

Both players have had respective knee and shoulder operations in the summer,

"We're hoping Michael Turner will play some part on Friday," he said.

"He's closer than Seb, who is probably a week and a half, two weeks behind. Whether he will make the start of the season is going to be very tight.

"It's disappointing we haven't had them for the bulk of the pre-season."