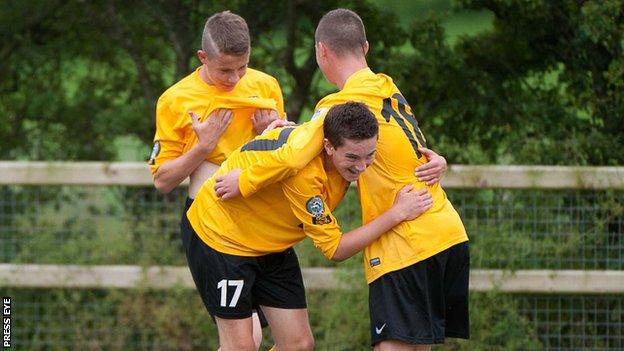 History was made on Wednesday as two of Northern Ireland's county sides progressed to the semi-finals at the Milk Cup youth football tournament.

County Antrim's 4-0 win over Ipswich set up a Junior semi-final meeting with Liverpool with Everton meeting Watford in the other last-four clash.

Tyrone's 1-1 draw with County Fermanagh was enough to earn them a Premier semi-final against CSKA Moscow.

Manchester United will meet Dubliners Cherry Orchard in the other semi-final.

A draw against Mexico on Friday night will be enough to clinch Northern Ireland the Elite title after they defeated the USA 3-1 on Wednesday evening.

Having beaten Denmark 2-1 on Monday, Northern Ireland are on maximum points with Mexico beating Denmark 2-0 on Wednesday following their opening 1-1 draw with the USA.

United, four-time Premier winners but without a triumph in the Premier grade since 2009, eased into the last four with a 4-1 win over TuS Altenberge on Wednesday night with 1993 champions Cherry Orchard progressing to the semis thanks to a 4-0 win over French outfit Vendee FC.

Liverpool were edged out of a place in the semi-finals by Cherry Orchard on goal difference despite their 4-2 win over Newcastle on Wednesday.

Harry Wilson hit two of Liverpool's goals but the win didn't prove enough as the Dubliners had a better goal difference of three.

A Merseyside battle in the Junior Final at the Milk Cup remains in prospect after Liverpool and Everton avoided each other in the semi-final draw.

The Anfield giants progressed to their last-four meeting with County Antrim by defeating Southampton 4-2.