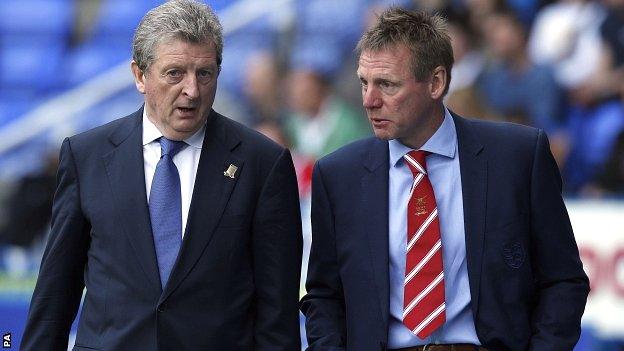 England boss Roy Hodgson is to take charge of the country's under-21 side for one match as the search continues for Stuart Pearce's successor.

Hodgson will lead the under-21s against Scotland at Bramall Lane on 13 August.

"There is an opportunity while the recruitment process goes on to work with this squad and it is something I very much wanted to do," said Hodgson.

Hodgson will take charge of the England senior side against Scotland the evening after at Wembley as usual.

The Football Association are advertising for a "proven leader with a wealth of coaching experience" to replace Pearce with former Portsmouth, Blackpool and Blackburn manager Michael Appleton, the FA's former head of elite development Gareth Southgate and England Under-20 coach Peter Taylor all linked to the post.

The FA expect to fill the position before the European Championship qualifier against Moldova on 5 September.

The meeting with Scotland, which is part of the 20th anniversary celebrations of anti-racism campaign Kick It Out, is England's only match before then.

"I watch the under-21 fixtures and I was in Israel for the European Championship but, as a coach, nothing can beat the training field and the team hotel for getting to know players properly," added Hodgson.

"In a World Cup year it makes absolute sense while there is the chance to do it."

Pearce claimed his side's poor performance in the European Championship was down to the players, with goalkeeper Jack Butland agreeing.

However the Football Association opted not to renew their agreement with the former Manchester City boss, ending his six-year stint in charge of the side.