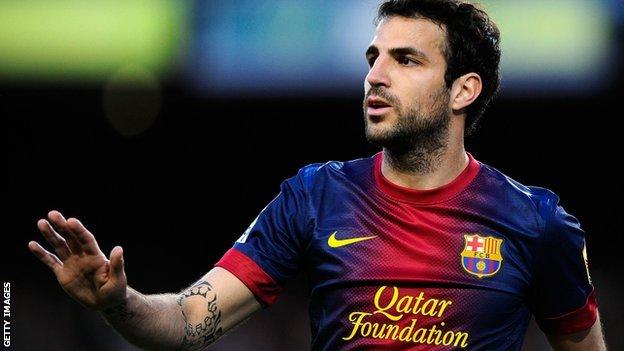 Manchester United have not given up hope of signing Cesc Fabregas and are preparing to make a third bid for the Barcelona midfielder - one that would exceed their £30.75m transfer record.

The Premier League champions have already had two bids, of £25m and £30m, rejected and been told the former Arsenal captain, 26, is not for sale.

But despite that, Fabregas remains a priority for new manager David Moyes.

The Spaniard would be open to a move to United should Barcelona accept the bid.

United's current transfer record remains the £30.75m they paid Tottenham for Dimitar Berbatov in 2008. And despite new Barcelona coach Gerardo Martino saying a third bid for Fabregas - whatever its value - would be rejected, United still believe they can make the deal happen.

In his first news conference since succeeding Tito Vilanova as coach, Martino said: "I'm not going to involve myself in the club's accounts, but considering the club has already rejected two offers, I would guess it will reject a third. In other words, Fabregas will remain here."

The Argentine's stance was reiterated by Barcelona vice-president Josep Maria Bartomeu, who said: "It's logical that we've had offers for Fabregas because he is a quality player, but he is not for sale. Whatever offer United make, however big, we will say no. Cesc Fabregas will stay a Barcelona player.

"That United shows interest in Cesc Fabregas is normal. He is a truly great player, it doesn't annoy us.

"It gives us pride to have such a good player in our team that United want him because they are a great club, but whatever offer arrives from them we are not going to sell Cesc Fabregas.

"We are counting on him. I think Tata [Martino] was clear that he is counting on him as a player and Andoni Zubizarreta [the director of football] from the first day when we asked him about it, saying there was an offer, he replied 'Cesc is not for sale'. We are very happy with him."

Were United to fail with their third bid, Moyes could turn to Everton's Marouane Fellaini or Real Madrid's Luka Modric.

United's only summer signing has been but last week Moyes insisted he remained upbeat.

"I am quite confident we will add to the squad. But what we have here is a really good squad of players already. You mustn't forget about the quality that is already here at Manchester United."