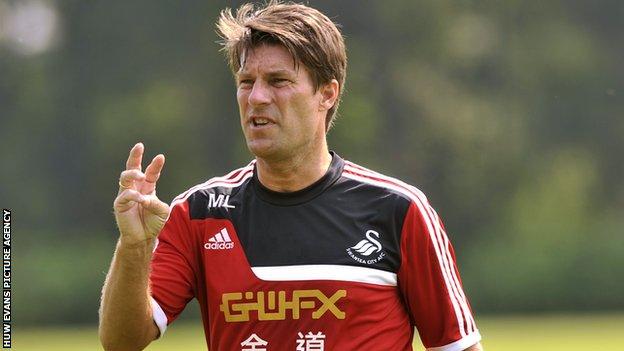 Swansea manager Michael Laudrup hopes his side's game against Malmo will be the start of a "special" Europa League campaign for the Premier League club.

Swansea face the Swedish side in the third qualifying round first-leg at the Liberty Stadium, their first game in a European competition since 1991.

The Welsh club secured their place in Europe after winning the Capital One Cup and Laudrup is eager for them to savour the experience.

"Of course it's special," Laudrup said.

"Suddenly as a player and a manager you are against sides you are not used to facing.

"In the League you play and you go on and on; here you have two games and one team will go out. The only time we tried it last season was the fantastic semi-final against Chelsea in the [Capital One] Cup."

Swansea are likely to be without defender Chico Flores, who is struggling with a thigh injury, while summer signing Jordi Amat is set to make his competitive debut.

Record signing Wilfried Bony is also set to be handed his first competitive appearance against Malmo, who are currently second in the Swedish top-flight.

Malmo secured a third qualifying round tie against Swansea with a 9-0 aggregate win over Scottish Premier League side Hibernian.

Laudrup says he believes the tie is evenly matched as Malmo are in the middle of their domestic season, having played 17 games since their campaign started in April.

But Malmo manager Rikard Norling claims Malmo will have to go up a level if they are to upset Swansea.

"Swansea are playing in the Premier League, the best league in the world," Norling said. "They have signed three players worth more than our annual budget so you have to put things in perspective.

"I understand why [Laudrup] is saying that, but everyone here knows how it should be and how it should end if things go the way they should. Swansea are strong favourites."