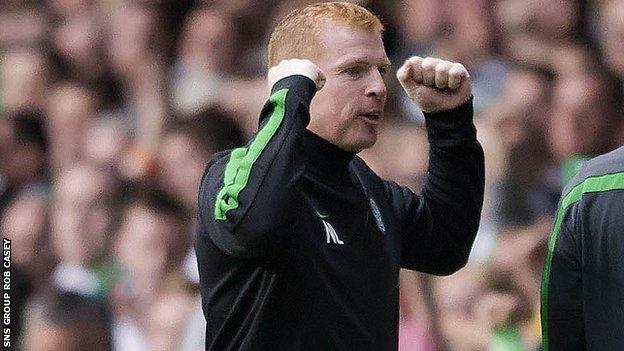 "I know the scoreline might not look the best but the clean sheet was vital and I would have taken any kind of lead," he told BBC Radio Scotland.

"That's our first quality competitive game and you could see there was a bit of rust - that's understandable.

"We got stronger as the game went on and maybe deserved a bigger victory."

Celtic were frustrated for long spells against the well-organised and at times robust Swedish champions before a second-half header from Kris Commons gave them the advantage for the trip to Boras next week.

"I said at half-time 'I'll take one-nil'," added Lennon. "They were making life very difficult for us.

"You have to break them down, you have to be patient. You could see we were snatching at things at times and our final ball wasn't there at times.

"Overall, the attitude of the players was fantastic and I thought the crowd were great as well."

Elfsborg are unbeaten at home since September 2011 and play on an artificial surface but Lennon is confident his side can build on their first leg advantage.

"They were functional but they will be a different team at home on the Astroturf," said the Northern Irishman.

"They will have to come to us and that may play into our hands.

"We played Helsinki at this stage last year and won 2-1, so we've got a better score tonight, with a clean sheet.

"I know we're capable of scoring away from home and if we score, they need three.

"It's another week down the line and we'll be fitter and sharper."

Celtic open their defence of the Scottish Premiership with a home game against Ross County on Saturday and Lennon hopes to see other players pushing for selection.

"Derk Boerrigter will be fit for the weekend, so that's a really good addition," explained the manager. " [Virgil] Van Dijk is not far away, [Charlie] Mulgrew and [Joe] Ledley got game time tonight."

Much of the attention was on Mo Bangura, who took his place in the Elfsborg side against his parent club who had failed to prevent the 24-year-old striker, on loan to the Swedes for one year, from playing.

Bangura was jeered each time he touched the ball but looked lively in the early stages and was full of running as the lone forward.

Lennon said: "I thought he did well, considering it was a thankless task. I thought Efe Ambrose and Kelvin Wilson played him very well."

Goalscorer Commons also believes Celtic can add to their tally in Sweden.

"We created a lot of good chances, on another night we could have had a few more goals," he said.

"We can go over there with plenty of confidence that we can score.

"They really packed the midfield. I'm sure there will be more gaps for us to cause them problems if they push forward more."