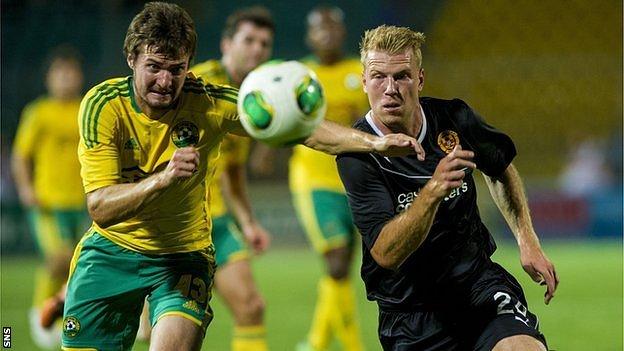 Motherwell's Europa League campaign came to an end as Russian side Kuban Krasnodar progressed to the play-off round with a comfortable aggregate win.

The only goal of the second leg came when Well defender Stephen McManus headed into his own net.

Both sides had penalties saved in the closing stages.

Kuban's Charles Kabore was unsuccessful from the spot after a foul on Ibrahima Balde before Bob McHugh's effort was saved after Djibril Cisse's handball.

Roughly 100 Well fans made the trip across to Russia and they would have been pleased by the spirited performance shown by Stuart McCall's men, who did fashion a few chances.

But without key players such as Iain Vigurs, John Sutton and James McFadden, all of whom had been rested, their task was made all the more difficult.

It is the second season in a row that the Steelmen have been eliminated by European debutants, having lost over two legs against Levante last year.

The signs were ominous early on as Balde, the danger man from the first leg, produced a lovely cross which David Tsoraev met with his head but the ball drifted over.

Shortly after, Kabore, who was a constant threat, orchestrated another opportunity for the hosts when he cut the ball back to Anton Sosnin but the attacker was off-balance and his volley failed to trouble debutant goalkeeper Gunnar Nielsen.

However, Motherwell were galvanised by the early scare and were showing composure on the ball when enjoying spells of possession.

The Steelmen did create a couple of half-chances when Zaine Francis-Angol nipped in behind the Kuban defence, after being played through by Henri Anier, but the 20-year-old could not get his shot away under pressure.

Stuart McCall's men took confidence from that brief sight of goal and again it was Anier who was providing the attacking threat. The Estonian powered a shot towards the target but it cannoned off Xandao and almost resulted in an own goal.

Dorinel Munteanu's men, who are unbeaten in their domestic league since last November, continued to control possession and broke the deadlock when the industrious Roman Bugaev delivered a cross which centre-back McManus attempted to clear, but his mistimed header ended up in the back of the net to deflate the visitors.

The pattern of the game changed as Kuban threatened to pile further misery on the Scottish Premiership side.

Marco Urena demonstrated a great injection of pace before producing a fine strike which was saved magnificently by Nielsen.

But it could have been worse for Motherwell as Balde was fouled in the box by Shaun Hutchison. Kabore stepped up to take the spot-kick but was denied by Nielsen.

The Fir Park side had the chance to net a consolation near the end after Balde's replacement, Cisse, handled, but substitute McHugh could not convert, with Aleksandr Belenov also tipping over Fraser Kerr's rebound.