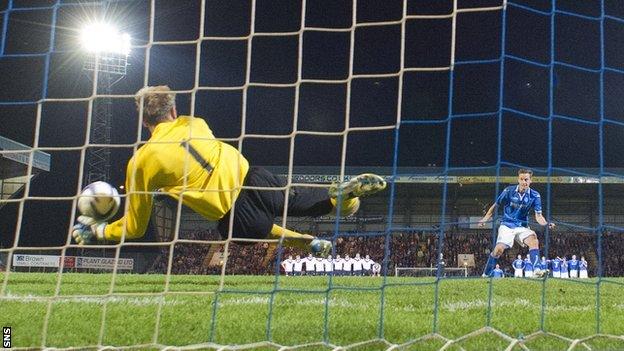 St Johnstone were knocked out of the Europa League qualifiers on penalties by Minsk in Perth after squandering their first-leg lead.

With no winner in extra-time, Dave MacKay and Paddy Cregg missed from the spot, while Vital Kibuk and Syarhey Kazeka missed for Minsk.

MacLean's spot-kick was saved by keeper Uladzimir Bushma to see Minsk through.

The visitors' Sergey Sosnovskiy was shown a red card in the wake of the shoot-out win, with the defender having been booked in regulation time.

Belarusian side Minsk knew they would have to end the hosts' 42-year unbeaten record at home in European contests to turn the tie in their favour.

With just over 10 minutes played, Sosnovskiy gave away a free-kick on the edge of the penalty area, but MacKay's dead ball effort was the first of a series of St Johnstone free-kicks to clear the crossbar.

Roman Begunov sent a header over the Saints bar from a Roman Vasilyuk corner.

May was thwarted by Bushma when the Belarusian keeper blocked a shot near the half-hour mark and the hard-working David Wotherspoon crossed for Nigel Hasselbaink to head wide of Minsk's goal.

The Dutchman should have opened the scoring moments later with a shot that shaved the right-hand post.

Shortly after the restart, MacLean shot wide, then headed over the Minsk crossbar from close range.

Saints were stunned in the 75th minute when Alan Mannus was beaten by Rnic, who delivered a swerving shot to level the tie.

The visitors, with a new sense of purpose, upped a gear and immediately pressed for a winning goal.

As regulation time trickled away, MacKay's well-struck free-kick was parried by Bushma, and the keeper then gathered to all but confirm extra-time.

Aleksandr Sverchinski and May had attempts at goal in the first period, but neither could put their side ahead.

Another save from Bushma kept May out in the second period then MacLean came close to securing progress with a late effort from three yards out.

The penalty shoot-out ensued and Vasilyuk sent Mannus the wrong way for the first of the spot-kicks before MacKay's effort was saved.

Andrey Razin scored to put the visitors in the driving seat before Cregg missed the target altogether.

Aleksandr Sverchinskiy made it three for Minsk, then Rory Fallon reduced the deficit before Kibuk was thwarted and Gwion Edwards brought it to 2-3.

When Kozeka missed his effort, it was down to MacLean, who watched in dismay as his effort from the spot was stopped by Bushma.