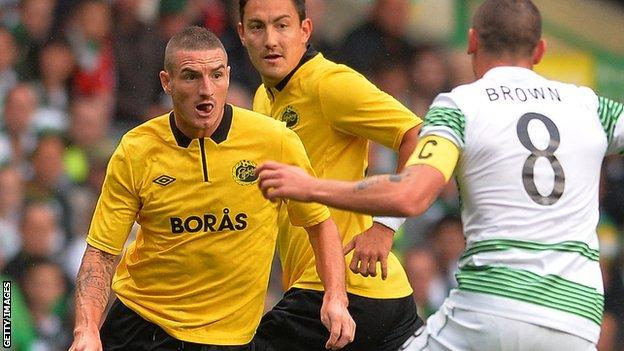 English forward James Keene believes his Elfsborg side have a "great chance" of overturning in Champions League qualifying.

But former Portsmouth player Keene said: "We are going into the game at home with confidence.

"Celtic Park was always going to be a tough place, but I think we showed that we are going to ask a lot of questions at home."

Keene began his career with Pompey, who loaned him to GAIS in Gothenburg before he made a permanent switch to Swedish football with Elfsborg in 2007.

The 27-year-old has since been loaned out to Fredrikstad and Djurgardens before a similar spell back at Fratton Park towards the tail end of last season.

But he is now back in favour with the Swedish champions, who are fifth in their domestic table, nine points behind leaders Helsingborgs.

And looking ahead to Wednesday's second leg of the third qualifying round tie with Celtic, Keene said: "I think we have a great chance.

"It is definitely not over. We are pretty happy with 1-0.

"We played pretty well. It is going to be a different game when they come to our place."

and believes the clean sheet could be vital.

But Elfsborg counterpart Jorgen Lennartsson, who selected on-loan striker Mo Bangura against Celtic's wishes, thinks his side are still in the tie ahead of the second leg in Boras.

"They were the better side and deserved to win the game," he admitted. "But I don't think Celtic should feel that the tie is over because it is not.

"We hoped we could defend to get a draw, but we conceded one goal. It was not good, but we think the game is still alive.

"We have lost one of the last 25 games at home on our astroturf.

"So it will be a different game, we have to attack and we will have the crowd on our side."