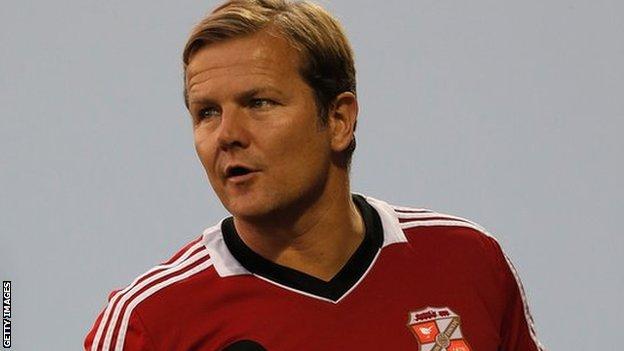 Cooper, 44, has been in temporary charge since Kevin MacDonald's exit on 13 July.

The ex-Darlington and Kettering boss will remain at the helm for the first game of the season, against his former club Peterborough.

When asked if Cooper was a feasible replacement for MacDonald, McCrory told BBC Wiltshire: "Why not?"

He continued: "Mark is here and he wants to be here. He wants to continue in a coaching capacity. Why wouldn't he want the manager's job? Anyone in their right mind would like to manage this football club.

"Mark is aware we are speaking to a couple of other candidates and we just felt being so close to the season, and given how much he has done, it would be naive to do that [replace him]."

MacDonald, who succeeded Paolo Di Canio, brought in Cooper as his assistant shortly after his own appointment in February.

But the Scotsman quit as manager after only four months, leaving Cooper in charge for their pre-season campaign.

And some fans have questioned his credentials as a permanent successor at Swindon, with most of his experience coming in non-league - bar a 13-game spell in charge of Posh.

"Mark has taken a bit of criticism recently," added McCrory. "They [the fans] don't see him as the future manager of this club. But they haven't seen the work he's done on the coaching side.

"We're a community club and we always listen to the fans, although the fans may not have always seen that.

"Although they might not be keen on Mark Cooper as a name and manager, but if he starts well and continues the style of football we've been seeing and gets the results, they'll be very fair."