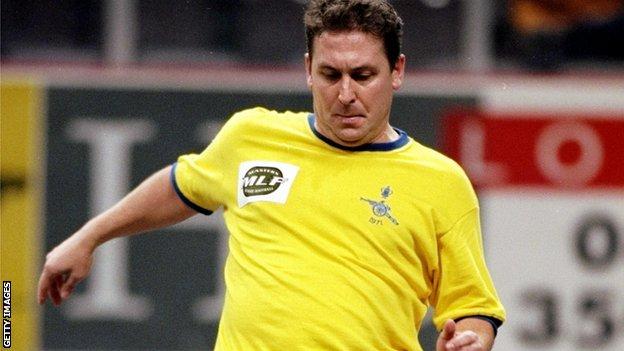 Arsenal say they are giving support and guidance to former England full-back Kenny Sansom who is reportedly homeless and fighting alcoholism.

Sansom, 54, told the Sun that he has struggled with personal problems for several years.

"We are aware of Kenny Sansom's situation and have been providing him with ongoing support and guidance," said an Arsenal spokesperson.

Sansom said: "I am in a bad way. Arsenal are trying to help me, but I have got to try to help myself."

The 54-year-old, who is the second most capped England full-back in history behind Ashley Cole, is reported to have been living on the streets and spending his time drinking and gambling.

Former Arsenal and England striker Ian Wright told BBC Sport: "Of course you'd wish Kenny well. He's a legend, not only at Arsenal but also at Crystal Palace. I worked with Kenny last season on a couple of radio shows and he was in good form.

"But it doesn't surprise me that it's happened because Kenny has had certain personal problems in the past and you just hope he's OK.

"Just because you're an international world-class footballer, it doesn't mean you can't fall on hard times. You can only wish him well and hope everything works out for him."

He made his professional football debut for Crystal Palace when he was 16 before moving to Arsenal, where he won the League Cup in 1987.

Sansom left the club in 1988, after falling out of favour, for Newcastle. He also had stints at Queens Park Rangers, Coventry, Everton, Brentford and Watford before retiring in 1995.

He represented his country 86 times during the 1980s, featuring in the 1982 and 1986 World Cups and the 1980 European Championship and scoring once - against Finland in a World Cup qualifier in 1984.