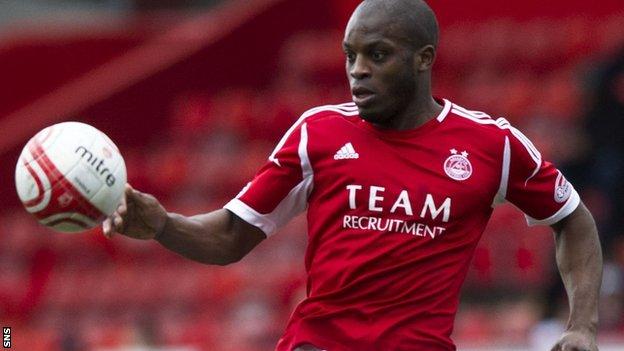 Derek McInnes says he wishes Isaac Osbourne well at despite the midfielder's summer exit from Pittodrie for personal reasons.

But the Aberdeen manager insists there are no hard feelings after Osbourne signed a one-year contract at Firhill.

"Well, he is closer to his family, although he's still a fair bit away," McInnes told BBC Scotland.

"I still keep in touch with Isaac and I spoke to him last week. I meant what I said at the time - he was a player that I was keen to keep working with.

"He's had his injury problems, but a fit Isaac Osbourne is a good player for any team in the SPFL.

"Partick have done really well to get him. Obviously they have some understanding of how his working week will be.

"If all had been right, he might have been still part of something with us. He is a player and a person I admire. I would have liked the opportunity to keep working with him."

McInnes has secured the signing of deal this week and, while the Dons boss admits he wanted to keep Osbourne at Pittodrie, a contract extension for the midfielder was never going to be a likely outcome.

"It wasn't a deal that was ever going to get done and Michael Hector came up anyway," McInnes added. "I wish Isaac well and, if he stays injury free, I'm sure he will do well for Partick Thistle.

"A few managers in England had phoned me about Isaac. I always thought that was where he was going to end up and I think Isaac did too, but like he said, he has bills to pay and a responsibility to his family to keep working.

"The offers that he maybe anticipated being there didn't come in for him."

"I spoke to Alex Rae at Blackpool and they were quite impressed with him and I think Isaac was hopeful something might happened there, but obviously it hasn't," revealed McInnes.

Dons defender Russell Anderson says that, although his side are in confident mood ahead of their season opener against Kilmarnock, they are not going to get carried away by expectations raised by seven summer signings following last season's eighth-place finish.

"I can see why they're making those predictions, but they made the same predictions last season and look what happened," Anderson said.

"We had a good start to the season, but we tailed off. For the new players coming in, this is all new to them and I'm sure they'll be feeling confident as we all are going into the start of the season, but we're not going to get ahead of ourselves."