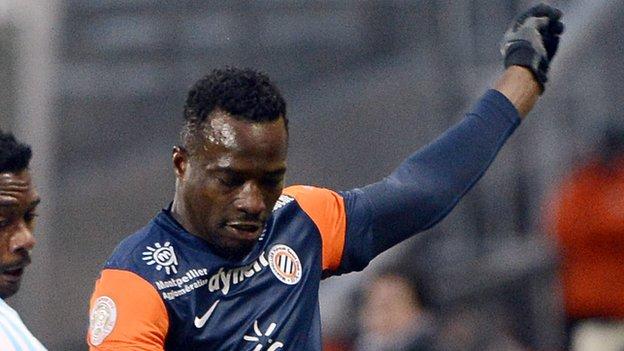 Sivasspor have confirmed the signing of Nigeria forward John Utaka on a free transfer following his departure from French side Montpellier.

The 31-year-old joins the Turkish side on a two-year deal after undergoing a successful medical in Sivas.

The ex-Portsmouth man turned down offers from the the Middle East and Asia after he became a free agent in the summer.

What is important is to be yourself, settle down and contribute to the success of the tea

Utaka sees his move to Sivasspor as a fresh start after ending a mixed two-and-a-half years at Montpellier.

"I've come to a club with desire to succeed. It's a fresh start and there is a strong motivation to succeed," the Super Eagle told BBC Sport.

"Every move is the beginning of a new chapter and I hope to give my best at all times to the club.

"I've played in Africa, England and France, but this is a different league with immense, passionate fans.

"I want to enjoy the game, like all the players here, and I want to get in the team and play well.

Utaka, who won the French Ligue 1 title with Montpellier in 2012 and has been capped 43 times by his country, is expected to have a similar impact to compatriot Michael Eneramo, who scored scored 36 goals for Sivasspor in two-and-a-half years.

But Utaka who won the English FA Cup with Portsmouth in 2008, is keen to play down any comparison.

"It's good to hear nice things being said about your countryman, but we are different people," he said.

"What is important is to be yourself, settle down and contribute to the success of the team."

Two goals from the Nigerian against Auxerre sealed a first Ligue 1 title for the French side Montpellier, denying big-spending Paris St Germain the title by three points in May 2012.

Utaka who began his career in south-eastern Nigerian city of Enugu has played in Egypt (Arab Contractors and Ismaily), Qatar (Al-Sadd), France (Lens, Rennes and Montpellier) and in England (Portsmouth).