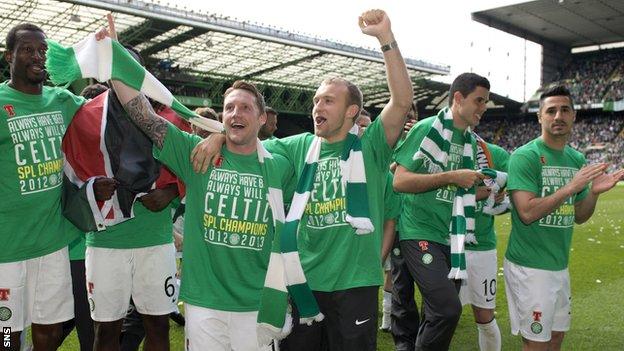 is a new name for an old-established 12-team league and football fans, forced to put up with surface-scratching rather than a radical overhaul, can expect this season to pan out in familiar fashion.

They won't experience anything approaching a title challenge for at least another two years - when would expect to end their lower leagues (not to mention Championship) adventure.

But I also reckon that the order of the supporting cast, lined up behind the stick-on champions, will bear a striking resemblance to the way it was when the last campaign ended in May.

It clearly won't be identical to the league formerly known as the Scottish Premier League, with having replaced Dundee, but it could be spookily similar.

The good news for Thistle is bad news for Hearts. Survival is the target for the and I don't just mean staying in the Premiership.

Even if they avoid liquidation, on the football front, their inexperienced squad will struggle to recover from a 15-point handicap imposed for going into administration.

Edinburgh rivals Hibernian might struggle to recover from the . That European embarrassment, which saw Hibs lose 9-0 on aggregate, and the departure of last year's top scorer, Leigh Griffiths, points to another bottom-half finish for Pat Fenlon's side.

I expect the biggest movers in the top 12 to be Aberdeen. A midfield of Jonny Hayes, Willo Flood, Barry Robson and should get them up the table. The worry would be: who'll give goals back-up to Niall McGinn?

The Dons are contenders for the runners-up spot, but I make Motherwell favourites to be best of the rest. Fir Park is minus some big players from last season, but Scotland internationals and James McFadden are two top-quality signings.

Watching St Johnstone , confirmed in my mind that the Perth team will again be at the top end of the table. The addition of midfielder David Wotherspoon from Hibs looks a big plus.

I don't see the other Saints, the Paisley version, matching that sort of league form even though St Mirren have done well to hold on to playmaker Paul McGowan.

Kilmarnock are unlikely to be in those upper positions either. If can get anywhere near his old strike rate, I might have to revise that forecast.

David Goodwillie is another striker trying to bring back his glory days. Dundee United, who've lost some top players, will hope Goodwillie's temporary Tannadice return on loan from Blackburn Rovers has the desired effect.

Highland pair Inverness Caledonian Thistle and Ross County were a revelation last season by both securing a place in the top six by the time the league split in two for the final round of fixtures in April.

It's going to be difficult to replicate their achievements of last season, but I don't envisage either of them being in the drop zone.

At the other end of the new Premiership, Celtic's winning points margin (16 last season) will be decided by the duration of their European campaign and how much they switch off at the weekends.

They're clearly in a league of their own, whatever you want to call it. The competition lies with the other 11 and I think we can expect another almighty scrap for places.