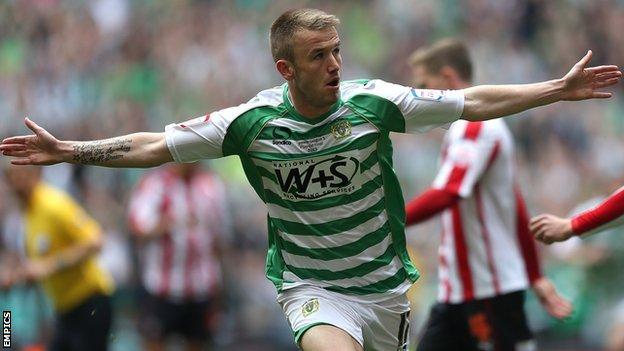 Yeovil Town striker Paddy Madden has said he is confident he can score at least 15 goals in his first season in the Championship.

"I have confidence in myself that I will get goals," the 23-year-old told BBC Somerset.

He added: "I'm going to be coming up against better defenders - ex-Premier League defenders - so it's going to be a tougher challenge but it's something I'm looking forward to."

Former League of Ireland forward Madden failed to make an impact on the Football League when he first came to England to sign for Carlisle in 2011.

Blighted by injuries during his time in Cumbria, he could only manage two goals in eight starts and 28 substitute appearances.

He was loaned to Yeovil in October and immediately found his form, scoring two goals on his debut against Colchester.

You have to go with your gut feelings, and we did that with Paddy. He had enough guile that if he was made a number one striker, his confidence would bring out everything else

Madden signed a permanent deal at Huish Park three months later - for an undisclosed fee described as a "bargain" by boss Gary Johnson - and finished the regular season with 22 for the Glovers, helping them reach the League One play-offs.

After progressing past Sheffield United in the semi-finals, Johnson's side went on to beat Brentford 2-1 at Wembley - Madden scoring after six minutes - to secure a place in the second tier for the first time in their history.

"It didn't start off too well for me last year, I wasn't even getting in the Carlisle squad," recalled Madden.

"Come the end of it I was in the play-off final with Yeovil so it just shows you the turn around.

"It's a new challenge for us so we have to make sure we approach it in the right manner."