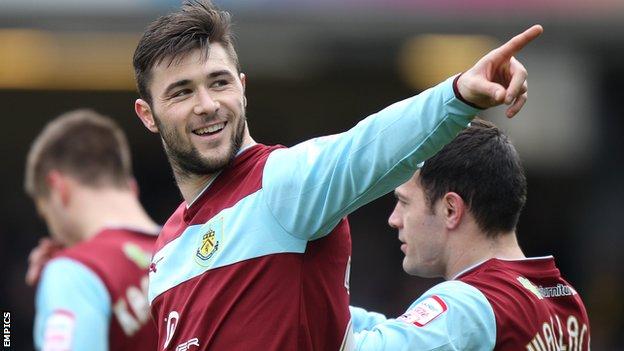 The 24-year-old has agreed a three-year contract at Loftus Road.

Austin was set to join Premier League newcomers Hull City in July, but a

"I've got no doubt that if we give him the right service he will score a lot of goals for us," QPR manager Harry Redknapp told the club website.

Harry spoke to me at length about the ambition of the club and the desire to return to the Premier League. That's where I want to be as well

Austin scored 28 goals in 40 appearances for Burnley last season and a total of 45 in 90 games after moving to Turf Moor in January 2011.

Relegated Rangers turned to Austin, who had a year remaining on his contract at Burnley, after missing out on the signing of Gary Hooper.

for the forward, who later

Redknapp continued: "Charlie's an out-and-out goalscorer and we're delighted to have him here.

"He's scored goals wherever he's played throughout his career and I'm very confident he'll take his game to the next level with us."

Speaking on Wednesday, Clarets boss Sean Dyche admitted to BBC Radio Lancashire that he was at the end of the summer transfer window.

Austin, who and was playing in non-league football until joining Swindon in 2009, could make his QPR debut in their Championship opener against Sheffield Wednesday on Saturday.

A prolific start to the 2012-13 campaign saw Austin become the fastest Burnley player in the club's history to score 20 goals in a season, reaching the mark after just 17 appearances.

The striker added: "Harry spoke to me at length about the ambition of the club and the desire to return to the Premier League. That's where I want to be as well.

"This is a really exciting time for me and I can't wait to pull on the QPR shirt for the first time. I'll come in, give my all and hopefully score the goals that ensure we have a memorable season."

Lee Hoos, Burnley's chief executive, said his club were desperate for the player to stay and were simply unable to compete financially with Rangers.

"We worked very hard to keep Charlie at Burnley and we are sorry to see him go," he commented.

"However, we were unable to compete with the package on offer from Queens Park Rangers, a club in receipt of the largest parachute payments in history and able to offer what are effectively Premier League wages in the Championship.

"Charlie has been the subject of a lot of attention from a lot of clubs, but has handled himself in an extremely professional manner in his dealings with us in what has been a difficult time for both him and the club."