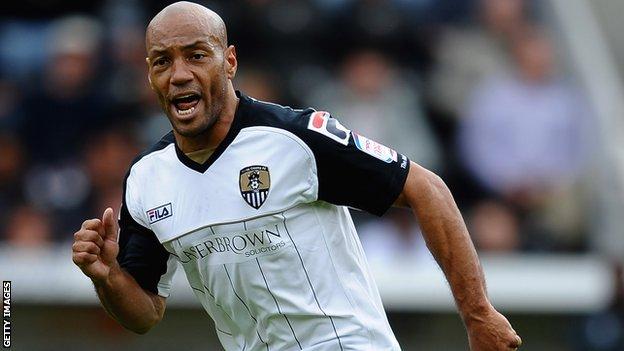 Torquay United have signed strikers Karl Hawley and Callum Ball ahead of the start of the season.

Hawley, 31, has a signed a permanent deal after being released by Scunthorpe, while Derby forward Ball, 20, has joined on loan until October.

They come in after the departures of Rene Howe and Ryan Jarvis.

"Together with Elliot Benyon and Ashley Yeoman, it gives us four strikers, which I'm delighted with," Gulls boss Alan Knill told BBC Sport.

Knill signed former Walsall, Carlisle and Preston front man Hawley from Notts County when he was in charge at Scunthorpe last season, and he scored 11 goals in League One matches for the Iron.

"He's always scored goals in his career and I like him because he's a proper man.

"When you grip his hand it's a proper man's handshake and he's strong and powerful. I just felt we needed a little bit of experience.

"I've been speaking to Karl for well over two months - it's taken so much time for various reasons, but we're delighted to have him in."

Ball, who has joined the Gulls on a youth loan, spent last season on loan at Coventry City where he scored three goals in 21 games.

He made his debut for Derby in May 2010 as a 17-year-old and has scored three times for the Rams in the Championship.

"Ideally we're looking at half a season, but we have him on a youth loan now because he's only 20 and then in October that changes and we'll try and extend the loan.

"But at the same time, if he comes and scores 10 goals by October the chances are he's going somewhere else, so for now we've got him until October, but really it's for however long Derby deem it necessary for him to be here."